UNITED KINGDOM––South African born Elon Musk cannot change the world, but he wants to make it better, easier to live, and pleasant to do business or work.  So, to help South Australia with its crippling energy problems, the South African businessman, engineer, investor, and inventor has just delivered on his promise to build the largest lithium-ion battery in the world

“100 days from contract signature or it’s free,” Musk tweeted at the time, in a deal initially negotiated over Twitter.

According to a press statement from the local state government in Australia, Musk is far ahead of schedule (a rarity for Tesla!), with the 100MW battery set to be energized and tested in the coming days.

The Tesla Powerpacks have been installed and connected at Neoen’s Hornsdale windfarm, north of Adelaide, and battery tests are expected to be run to ensure local regulatory requirements are met before it begins operating on December 1st this year.

After the blackout incident, the Australian Government blamed the failure of renewable energy to cover usage. Musk’s battery farm is expected to store huge amounts of energy from renewable sources like wind and solar, and funnels it out to the grid when usage is high.

Musk announced the completion of the project in a tweet, praising his employees and informing the world of his company’s new energy empowerment initiative. 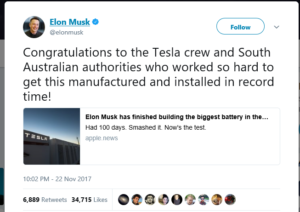 “The world’s largest lithium-ion battery will be an important part of our energy mix, and it sends the clearest message that South Australia will be a leader in [sic] renewable energy with battery storage,” South Australian Premier Jay Weatherill said in a statement. “An enormous amount of work has gone into delivering this project in such a short time.”

Responding to Musk’s announcement, Mike Cannon-Brooke, in a tweet, questioned the seriousness of Tesla, Musk’s company, in addressing energy problem with a battery. 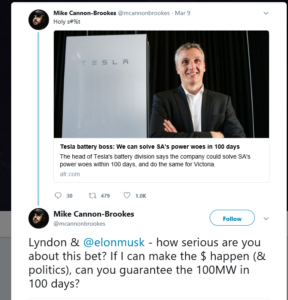 Sources say Musk made his promise to help South Australia address its energy problem in March on Twitter and the 100-day countdown started at the end of September after the company inked a deal with the South Australian government.

Musk principally achieved his promise within two months, a period well short of the self-imposed 100-day deadline. The battery is estimated to cost at least $50 million, according to sources.

“As an African, Musk’s engineering capabilities in the area of energy empowerment could help address Africa’s energy underdevelopment, but the question is: will African nations manage such projects and undertakings, considering that the most serious issues facing the continent are not the lack of resources and capacity, but good governance, corruption, the lack of transparency and accountability, security concerns and judicial dishonesty,” says Jones Nhinson Williams, a Liberian born and U.S. trained international public policy, workforce development and labor market information professional.

Williams said, “the lack of advanced innovation and superior development are not Africa’s weakness” Adding, “Our weakness is the lack of good governance and patriotism.”  According to Williams, who heads the U.S. Bureau of Labor Statistics Programs for the state of Maryland, “with the level and degree of African professionalism and ingenuity out there, African countries should be able to create millions of jobs in manufacturing, agricultural-food production, construction, information technology, financial activities, leisure and hospitality, healthcare as well as in professional and business services for their people.”

Asked what his future priorities are for helping African nations with the drive and focus for job creation, Williams said, “one cannot be fed if he or she does not express an indication of hunger and the desire to get food.  African leaders must demonstrate a commitment from mere politics to labor and development economics,” he added.

He singled out Liberia, his native country where he said, “corruption, greed, and selfishness have made almost everyone wanting to become a politician or work for the government.”

Williams said, over the years, especially during the administration of President Ellen Johnson Sirleaf, he has made several recommendations and drafted plans and proposals to help create jobs, but most of the people in the Liberian government, including the country’s leadership, are unpatriotic to the country and to the Liberian people.  Their dedication, it would appear, is to “corruption, greed and the thirst for ill-gotten wealth and power,” he added.

According to sources, Williams is being encouraged by authorities in the United States to return to his native region of West Africa and help with job creation, workforce development, and innovation empowerment probably under an international programme.  Similar offers have come up before in the past, but the father of two said then his commitment to his two young American born daughters had been an issue at the time. “They were much younger and so I couldn’t leave them,” he said.

He said, considering the degree of transgenerational poverty and the deadly effect of illegal migration experienced by many young Africans just to secure a better future for themselves have become a motivating factor for him to return to Africa and help if the need arises.

Williams said, he is reaching out to Musk and other African professionals as well as international groups such as the International Monetary Fund, The World Bank, USAID and the United Nations Development Programme (UNDP) to develop a roadmap for job creation, workforce development and a plan to promote innovation and small business establishments throughout Africa so as to stop the illegal migration and death of young Africans struggling to enter Europe and the United States.

Musk, an African born engineering genius from South Africa, is the CEO of Tesla Motors, one of the world’s luxury brand of vehicles. He is also the founder, CEO, and CTO of SpaceX; a co-founder, Series A investor, CEO, and product architect of Tesla Inc.; co-chairman of OpenAI; and founder and CEO of Neuralink. Musk is also a co-founder and former chairman of SolarCity, co-founder of Zip2, and founder of X.com, which merged with Confinity and took the name PayPal.