West Africa -The Government and people of Sierra Leone along with several local humanitarian organizations need support to mitigate the human suffering ongoing in Sierra Leone because of the recent natural disaster.

The citizens in and around the capital Freetown woke up in agony and grief after land slides and flooding hit many parts of the city around 5.00 am this past Monday morning.

According to an account, around 5.00 am, heavy shower at Motemoh on the Sugar loaf of Regent hills. The second downpour of rain occurred around 6.00 am, swept over 200 shelters with an estimated 1,000 households.

Thousands of peoples were affected and over a thousand more including children, women, disabled, youth remained unaccounted for.

Billions of Leones worth of properties lost in what sources say is tragedy of great magnitude. Rescue efforts are ongoing, led by the Sierra Leone’s Office of the National Security with support from the Military, Police, Fire Force and Aid agencies, including the Catholic Caritas Freetown under the leadership of Rev. Fr. Peter Konteh of the Catholic Archdiocese of Freetown.

Selfless youths, citizens and medical personnel are seen all around the affected communities helping in the rescue mission. 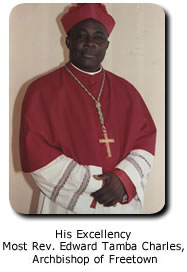 Archbishop Edward Tamba Charles, the metropolitan prelate of the Catholic Archdiocese of Freetown and head of the Catholic Church of Sierra Leone has called on Sierra Leoneans to pray and remain united in this tragedy as one family. He has also instructed Caritas Freetown to work with communities and families in providing basic relief irrespective of race, religion, sex or social status.

The government of Sierra Leone, various relief and humanitarian institutions including the Catholic Caritas Freetown, the Sierra Leone Red Cross and many other groups need urgent humanitarian support to meet the country’s pressing humanitarian needs such as food, shelter material, medicine, clothes and more.

Over 400 bodies have been received by workers at a Mortuary headed by Chief Pathologist, Dr. Owis Koroma. Emergency response centers have been opened since Monday.

Rescue workers are said to have uncovered an additional 400 bodies so far from a mudslide on the outskirts of Sierra Leone’s capital Freetown, the country’s chief coroner Seneh Dumbuya told news group.

600 people are feared missing in the deadly mudslides and at least 500 bodies could be uncovered as the search continues, said Dumbuya.
Many dead bodies were in horrible state, missing arms, heads or legs, according to rescue workers.

“Contingency plans are being put in place to mitigate the outbreak of disease like cholera,” he told a local radio station, FM 98.1.

Sulaiman Parker, the environmental protection officer in the Freetown City Council, said bodies will be buried in the next 48 hours.

Sierra Leone is the third most prone disaster country in the world, according to the Sierra Leone’s Environment Protection Agency and the Office of National Security,

“I have never seen anything like it,” said Abdul Nasir, program coordinator for the International Federation of Red Cross and Red Crescent Societies in Sierra Leone.

“A river of mud came out of nowhere and swallowed entire communities, just wiped them away. We are racing against time, more flooding and the risk of disease to help these affected communities survive and cope with their loss.”

An estimated 9,000 people have been affected, Nasir said.

Many of the impoverished areas in Sierra Leone’s capital are close to sea level and have poor drainage systems, exacerbating flooding during the rainy season. Freetown is also plagued by unregulated building of large residential houses in hilltop areas.

Thousands of makeshift settlements in and around the capital have been severely affected.

“The government has been warning people not to construct houses in these areas. When they do this, there are risks,” Nasir said. “People don’t follow the standard construction rules, and that is another reason that many of these houses have been affected.”

Deforestation for firewood and charcoal is one of the leading factors of worsening flooding and mudslides.

Sierra Leone is hit by a national tragedy. The whole country and its citizens home and abroad is grieving and mourning. The Catholic Archdiocese of Freetown through its humanitarian relief office, Caritas Freetown, is on the frontlines despite huge strains on its operations. For details on how to reach Caritas Freetown to help a grieving family, contact:

Grace Mugabe, Zimbabwe's first lady, To be Charged for Assault in SA