NORTH AFRICA ––Amnesty International has condemned the authorities in Algeria for the arrest and deportation of thousands of migrants.

The international rights group have confirmed that the Algerian authorities have arrested and deported more than 2,500 sub-Saharan Africans to Niger and Mali in the past month.

Amnesty International described the Algerian action as “arbitrary arrests” and “illegal” mass expulsions.   The sub-Sahara African migrants were detained in the Algiers area and Blida, 50 kilometers (30 miles) to the southwest. 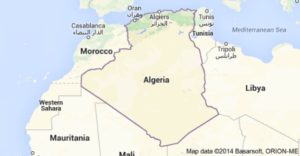 They were subsequently placed on buses and taken 2,000 kilometers south to Tamanrasset, according to the rights group.

Amnesty International added that the migrants were then “abandoned” on the Nigerian side of the border between the two countries.

The international rights also confirmed that at least 100 other migrants who were dropped on the Algerian side of the border had to walk for six hours in the desert.

The human rights group released said many other nationals were also deported through the border with Mali, putting them in grave danger with extremism.

Amnesty accused the Algeria authorities of “ethnically profiling” migrants and failing to check if they had official permission to stay in the country.

According to the rights group, some of those deported since September 22 had valid visas, and that the deportations “did not respect the guarantees of due process”.

The group said those deported, from various sub-Saharan African countries, included 300 minors — some of them unaccompanied.

The incumbent Algerian prime minister, Ahmed Ouyahia, has accused “illegal aliens” of bringing “crime, drugs and other plagues” to the country.