Judges, lawyers and legal experts at the ICC, Monday, October 30, 2017

THE NETHERLANDS —-The war crimes trial of an aide to Ethiopia’s former Communist ruler has begun at The Hague in the Netherlands.

Reports reaching Globe Afrique says the International Criminal Court (ICC) today began looking into war crimes and crimes against humanity cases that happened in Ethiopia during what is considered the ‘Reed Terror’ war.

A 63 years old Ethiopian, Eshetu Alemu, faces several accounts of war crimes in a case that starts today.  He is accused of ordering the execution of 75 people during Ethiopia’s “Red Terror” purges in the late 1970s.

Alemu, a former aide to then Communist ruler Mengistu Haile Mariam, is also accused of torture and inhumane treatment of Ethiopians.  He has, however, denies all the charges against him.

According to sources familiar with the ‘Red Terror’ war period, more than 300 individuals have been named in four war crimes charges.

Prosecutors in the case are alleging that Alemu, was a henchman for Mengistu in the north-west Gojjam province.   During the trial opening, in the Dutch court, Eshetu Alemu said that prosecutors had “the wrong person”.

“I was really shocked when I heard what prosecutors are accusing me of doing, which I could behave like that as a human being. I deny the charges against me,” he told the four judges.

Mengistu Haile Mariam, the Marxist-communist strongman ruled Ethiopia between 1977 and 1991 following the overthrow of Emperor Haile Selassie in 1974. In 2007, Mengistu himself was found guilty of genocide in absentia.

During and after his ouster in 1991, he fled to Zimbabwe where he still resides with his friend Robert Mugabe, the president of Zimbabwe.

International legal analysts say Liberia’s issue looms at the ICC, and soon cases in Liberia will surface, holding accountable individuals who bear the most responsibilities in the Liberian conflict.

One international analyst who spoke on condition of anonymity but is privately reviewing such cases says the likelihood that Liberian president Ellen Johnson Sirleaf, Senator Prince Johnson, Benjamin Yeaten, George Boley, and Sekou Konneh will be ordered to appear before the court is near at hand.  Some analysts expect the cases might gain weigh after President Sirleaf leaves office in January 2018.

Commentators say the war crimes case of Liberia will be interesting given the global stature and connections of President Ellen Johnson Sirleaf who is accused of founding the National Patriotic Front of Liberia (NPFL) rebel group which became a parent organization of several brutal rebel sects, including the Revolutionary United Front (RUF) of Sierra Leone. 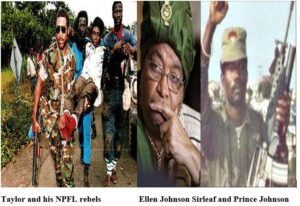 Mai Gergen, an international campaigner against impunity based on stature, says international justice is color blind, status blind and therefore President Sirleaf needs to answer for her deeds.

Over the past weeks, victims of the Sierra Leone’s civil conflict conducted by the RUF have been working with international advocates in the U.S. and Europe to bring charges and legal action against President Sirleaf and former Burkina Faso’s president Blaise Campaore for materially and financially supporting the NPFL and the RUF that caused bodily and other harms to them.

In her book, “This Child Will Be Great,” President Sirleaf admitted raising the seed money that founded the NPFL but said she later withdrew her support from Charles Taylor after some differences.   Sources say President Sirleaf’s former networking partner, the late Harry Greaves, before his ‘political assassination’ by people believed to be hired by the leadership of country’s national security in Monrovia, ditched out the entire operation of President Sirleaf’s material support for the NPFL to investigators in the United States, including how she facilitated the escape of Charles Taylor from prison in Boston as well as how she used a U.S. registered tax-exempt nonprofit organization, the Association for Constitutional Democracy (ACDL) to raise funds that founded and supported the NPFL rebel group.

Experts say this could pose serious problems for Madam Sirleaf with the U.S. Internal Revenue Service and the legal system should an investigation ensue.

If the ICC proceeds with investigating Madam Ellen Johnson Sirleaf, she will be the first African female head of state to undergo such international test, and perhaps the third West African leader to be indicted.  Laurent Gbagbo of the Ivory Coast and Charles Taylor of Liberia have all been indicted by the ICC.  Taylor is currently serving decades of prison time in the UK.

A few years ago, the ICC indicted the incumbent president of Kenya, Uhuru Kenyatta and his deputy William Ruto for crimes against humanity that emanated from post-electoral violence.  Kenyatta has since been freed while the case against Ruto is pending.