WEST AFRICA–Liberia’s vice president Joseph Nyumah Boakai of the ruling Unity Party (UP) on Saturday, September 16, 2017, officially launched his presidential campaign in the Liberian capital, Monrovia, with mammoth crowd in attendance. The organizers of the event did an excellent job with mobilization, as the Antoinette Tubman Stadium, the country’s first and historic soccer arena, was packed beyond capacity.

Surrogates of the vice president were on hand to control the crowd. Several foreign (mainly Western) political strategists and analysts were also on hand, though quietly, to monitor the event. A respected Western political operative present in Monrovia only to monitor the campaign told Globe Afrique that the 10 October 2017’s presidential election of Liberia is the most crucial in West Africa’s electoral history because it has much of an international implication than an average Liberian would recognize. “Liberians should therefore not act unreasonable in choosing just anyone,” He said further.

He said, “The truth is the vice president is member of the ruling Unity Party and he is the sitting vice president of Liberia, but many of us in the West as well as others in ‘advanced’ African nations like South Africa don’t see him as a UP’s candidate; he is running as a candidate of a ‘movement’ based on experience, patriotism, and integrity.”

Adding, “Liberia needs experienced managers and leaders who can make the country and people proud on the world stage with their personality, intellect and integrity. We think having someone who is already highly regarded and admired will be a plus for the country.”

Despite the huge campaign crowd, Vice President Boakai only greeted his supporters and thanked them for attending the event, admonishing them to go out and vote on October 10, 2017.

Senior campaign aides and sources close to the “Movement for Boakai” informed Globe Afrique that the vice president will deliver his official campaign message later via live radio.

The aides said the speech will largely focus on patriotism–––a summary of Boakai’s belief in what Liberia, Africa’s oldest republic, needs to renew itself, position itself, and make progress. 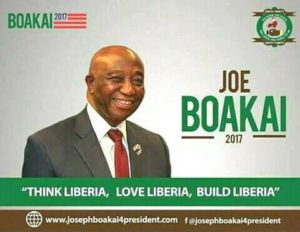 Under the theme, “Think Liberia, Love Liberia, Build Liberia”, the respected and most experienced Liberian political and bureaucratic technocrat will address issues of national unity, reconciliation, and socio-economic development with emphasis on village to market roads, health care, the rule of law, food security and employment for all Liberians willing and prepared to work.

Considered by his supporters ‘the first among equal of indigenous candidates’ opting to lead Liberia [after what they considered as the “failed leadership of President Ellen Johnson Sirleaf”] not from the lenses of the Monrovia conclave, but from the ‘village to the city,’ the vice president is expected to “hammer home his record of integrity, leadership and experience,” a senior aide said.

During the event, the vice president told his supporters and well-wishers that he and his team will fulfill promises made during their campaign around the country. Adding, that the turnout was an indication that his supporters love Liberia.

The Boakai’s campaign official event did not only draw the attention and interests of Liberians in the country and around the world. Several prominent personalities in the West (who decided to speak on condition of anonymity due to non-interference election laws) have developed keen interest in the unfolding political developments in the country.

The state governors of Georgia, Minnesota and Ohio as well as other US officials with whom the vice president has developed and built a cordial relationship carefully monitored the event.

Sometime ago, Vice President Boakai met with the Governor of the State of Ohio, John Richard Kasich in Columbus, Ohio to discuss about a wide range of areas of possible collaboration between Liberia and the state of Ohio. Those areas included education, agriculture, and health. During the discussion, both men agreed that education, agriculture, and health care  are amongst the crucial areas on Liberia’s agenda for transformation.

Governor Kasich is a well-regarded leader in the United States. A former presidential candidate in the US 2016 election and former chairman of the House Budget Committee in the US Congress during the presidency of Bill Clinton, his range of influence in US politics and conservative leadership is boundless, especially since he is mostly considered to be a future US president from most conservative analysis. Hence, a relationship with him by any leader from a developing nation is vital.

In addition, sources close to the Obama say, former U.S. First Lady Michelle Robinson Obama, considered a “god daughter’ of the Liberian vice president, is said to be jeering for the victory of her “godpa” with confidence. Globe Afrique’s efforts to reach Mrs. Obama’s to get her take on yesterday’s event for the vice president is still underway, as appointment to speak with the former First Lady awaits final approval.  Sources say, the former US First Lady and the elderly Liberian statesman have a unique relationship, a father-daughter friendship.

Globe Afrique has also learned that there is keen interest in Vice President Boakai by most known international foundations around the world. A source connected to most “Planned Given” institutions said Bill and Melinda Gates might develop strong interest in fostering research projects in Liberia if a likeable and trusted candidate is elected.

Sometime ago, the Bill and Melinda Gates Foundation awarded US$1,495,650 research grant to the Office of Vice President Joseph N. Boakai. The Gates, a source indicated, seem to have explicit interest and respect for the Liberian vice president, as an experienced and trusted leader.

One international nonprofit executive based in New York said, “Having the Bill and Melinda Gates Foundation, global nonprofit giant which wants to keep the world accountable in the fight against global poverty and disease, giving a grant directly to a vice president office amounts to tremendous trust and confidence in that person. Certainly, there is huge admiration for the Liberian vice president by the Gates.

The Bill and Melinda Gates Foundation has, in recent weeks, began publishing an Annual Progress report to show statistics on child mortality, HIV, and family planning around the world.
In statement released most recently, the Foundation said, “For years, we’ve heard people question whether investments in the fight against global poverty have an impact. Clearly, we believe they do.”

“We are investing all our resources in that fight. But that doesn’t mean every dollar spent on development has maximum impact. And that must be our goal,” the state added.

“We are launching a report this year and will publish it every year until 2030 because we want to accelerate progress in the fight against,” the statement concluded.

Also, the Prince of Bologna in Italy, who recently sent a delegation to visit Vice President Boakai in Liberia, is said to have a strong interest in Liberia due to his relationship with the vice president. According to sources, the Italian prince who commands a strong network of Italian and European investments with interest in making Liberia a manufacturing and medical hub in West Africa also monitored the vice president’s campaign launch. Accordingly, the Italians are also interested in constructing a dialysis center in Liberia so that Liberians suffering from kidney and other renal diseases can have easy access to treatment and cure.

Thousands of Liberians who also monitored the launch of all presidential campaigns in Liberia, beginning with Senator George Manneh Weah followed by Counselor Charles Walker Brumskine paid closed attention. However, Saturday’s events drawn supporters and former enemies of the ruling Unity Party together in Liberia and on social media. Many people who had previously opposed any candidate running on the Unity Party’s ticket say they support Vice President Boakai as along as he is not supported by President Ellen Johnson Sirleaf.

Below are views / personal opinions expressed by some Liberians in the country.

Moses Worgbeh of New Kru Town said, “Anything that woman they called Ellen Johnson Sirleaf is in, we will never back it. I am supporting VP Boakai because he is not supported by President Sirleaf. Anything Sirleaf supports is not clean, not good”

Ballah Kollie who traveled from Bong County for the event in Monrovia said, “VP Boakai loves this country. He is experienced and respected. Ellen Johnson Sirleaf sidelined him and because he is a man of peace he exercised patience. We need to give this humbled man the chance. All the people that want football player George Oppong Weah to be president don’t really care for this country. Weah does not even know what being a senator is.”

Sampson Zleh who traveled from Nimba County echoed previous speakers, adding, “As long as Ellen Johnson Sirleaf and her Congo people are not with Boakai, we will support him. If Boakai looks up to Ellen for support, me and my followers will abandon his campaign. That woman Ellen Johnson Sirleaf is wicked.”

Emmanuel Wilson who traveled from Maryland County, Liberia for the event said, “I am here to send a message that our country needs to vote for people with experience and proper education. I have three real choices in this race. I like Cummings, Brumskine and VP Boakai. Any of these people can be president, not Weah. I love Weah but being senator is okay for him. He is a gambler. He will gamble our country. See the games he has started playing with Charles Taylor and Sirleaf. Robert Sirleaf and Charles Taylor finished buying him already. We cannot trust him. Besides, he is not suited for the job due to the lack of experience and proper education.”

Miatta Kroma who traveled from Grand Cape Mount County said, “I am visiting my sister in Monrovia. At first, I had no interest attending this event. But after I heard that President Ellen Johnson Sirleaf was being banned by the campaign and Party’s leadership from attending, I decided to come. And I will support Boakai if he keeps President Sirleaf away from ‘our movement’ to change Liberia and give it back to native Liberians. I am presently divided between four candidates, Boakai, Brumskine, Cummings and MacDella Cooper.” I like MacDella because she brings hope to Liberian women, especially young girls in school, after Ellen Johnson Sirleaf’s fiasco.”

According to Globe Afrique’s Research and Analysis team, thousands of Liberians in country and around the world monitored and reacted to the event via social media, mainly Facebook. Below are reactions of some of people on social media – Facebook. 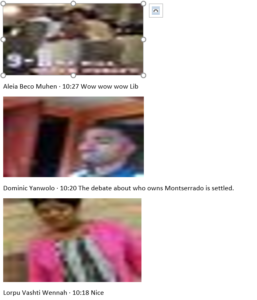 Reporting was a collaboration between our West African reporters and our headquarters’ staff reporter.