The second round of the presidential elections, which was due to take place on 7 November 2017, has been postponed due to legal challenges. The situation is calm but there is greater potential for incidents of civil disorder during this politically tense time. You should avoid large crowds, political rallies and public gatherings.

Terrorist attacks in Liberia can’t be ruled out. As seen in Mali, Côte D’Ivoire and Burkina Faso, terrorist groups continue to mount attacks on beach resorts, hotels, cafés and restaurants visited by foreigners. Be especially vigilant in these locations.

There’s a heightened threat of terrorist attack globally against UK interests and British nationals from groups or individuals motivated by the conflict in Iraq and Syria. You should be vigilant at this time.

General medical facilities throughout Liberia are unable to provide the same standard of healthcare as in the UK. Facilities in rural areas are rudimentary. Many medical facilities expect to be paid up-front for treatment. If you travel to Liberia, stay in contact with your employer or host organization about the support that they can provide to you while you’re in the country.

If you’re concerned that you might have been exposed to, or showing symptoms of Ebola, you should seek immediate medical advice. If you’re in the UK call NHS on 111.

Avoid travelling at night outside Monrovia, except to or from Roberts International Airport. Make sure you have pre-arranged transport from the airport.

There are sometimes clashes between armed groups from both sides of the Liberian/Cote d’Ivoire border in some of the more remote border areas of Grand Gedeh and River Gee Counties. To avoid straying into these areas, use the main roads when travelling in these counties.

The ability of the national authorities and the UN to provide emergency help outside Monrovia is limited.

Check the security situation before travelling to any part of the country. Violent incidents, particularly in rural areas, are possible because of land disputes, illegal mining and occupation of rubber plantations. Illegal rubber tappers have been responsible for many attacks on security forces in the Firestone rubber plantation. 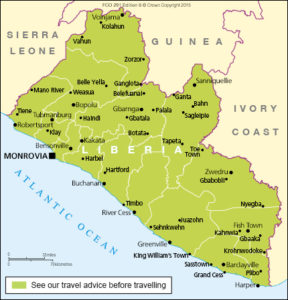 Avoid travelling away from the major routes within the plantation. Organized groups of former combatants may be present in areas of the country where there is limited government security presence, including Sinoe rubber plantation and Sapo National Park.

There is a high level of crime in Monrovia, including armed robbery. The Liberian National Police has very limited capability to prevent or detect crime or to provide emergency response in any part of the country. Levels of crime are much higher after dark. Don’t walk anywhere in the city at night.

Take care when walking alone and only do so during daylight hours in areas frequented by foreigners.

Most crime is opportunistic theft, but there are organized criminal gangs. Thieves are often armed with knives or machetes, but occasionally also carry firearms. While Liberians are the main victims of crime, the relative wealth of international visitors makes them an attractive target for criminals.

Avoid carrying valuables in public and be vigilant at all times, especially at night. Mobile phones and laptops are common targets for theft. Foreigners have been mugged in the Mamba Point and Sinkor areas of Monrovia (including Sinkor beach in broad daylight), where most international visitors stay. Be wary if you are approached by strangers. Criminals also operate in nightclubs and on beaches.

Accommodation occupied by international workers has occasionally been targeted by burglars. Thefts have occurred in taxis. You should avoid local public transport. There is a high incidence of rape in Liberia and there have been cases of rapes and attempted rapes involving foreign women.

Take extra care when driving in heavy traffic or off the main roads.

Roberts International Airport is around 30 miles from central Monrovia, much of the journey passing through rural areas.