People throughout Monrovia gearing up for, and on the their way to, attend the official launch of Liberty Party’s Charles Walker Brumskine’s campaign for president

WEST AFRICA–– Dubbed the issues, policy, and action-oriented political campaign, Liberia’s Liberty Party took control of the Liberian capital, Monrovia, on Saturday during what eye witnesses say is the most “broad-based” launch of any political campaign in the most recent history of the country.

Charles Walker Brumskine, the party’s political leader and presidential candidate for the 10 October 2017 election, said he is the most suitable leader to replace outgoing president Madam Ellen Johnson Sirleaf, to create equal opportunities for all Liberians including those with developmental disabilities as well as in fighting corruption––one of the single most serious problems affecting Africa’s prosperity and development. 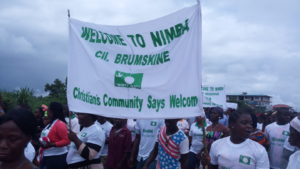 This is Brumskine third time running for president, after two unsuccessful attempts both in 2005 and 2011 against incumbent and outgoing president, Madam Ellen Johnson Sirleaf.

Political analysts and score of supporters say the accomplished Liberian corporate lawyer and former president of the Liberian senate has the experience, integrity, intellectual agility, endurance, and functional capacity to lead Liberia from a gloomy present to a prosperous future.

Thousands of supporters, partisans, friends, and well-wishers graced the occasion despite an earlier rainfall before the program started.

Even though the campaign launch occurred at the party’s headquarters in Congo Town, an upscale city-town outside of Monrovia, several streets in Monrovia were on a locked down with supporters, friends and well-wishers gearing up for the event. 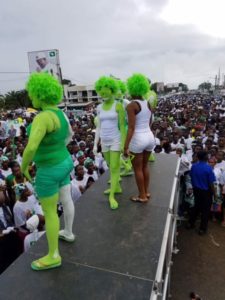 The Liberty Party’s leader is one of twenty overall candidates and one of five serious candidates contesting the presidential election to succeed outgoing president Madam Ellen Johnson Sirleaf.

The Liberty Party’s leader promised to bring real and substantive change to Liberia, including improving living conditions for all Liberians, investing in education, youth training and apprenticeship, and workforce development as well as energy and infrastructure development.

Along with his running mate, former Forestry Development Authority (FDA) managing director Harrison Karnwea, supporters and political watchers say the Liberty Party’s leader has a clear shot at entering a second round in the 10 October 2017 presidential election since projection shows no candidate can have a clean win and that a roundoff is likely.

Brumskine who has a track-record of integrity and consensus building promises to reconcile and unify the country to ensure peaceful co-existence and harmony. The respected legal scholar also promised to support judicial independence, access to equal justice, and the rule of law. 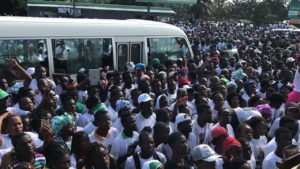 Brumskine, who as president of the Liberian senate made history in facilitating the expulsion of a senate colleague for corruption, said he will fight corruption and ensure that anyone found guilty of corruption is held accountable under the due process of the law.

Central among his priorities for a changed Liberia when he assumes office as president in January 2018 are: eliminating corruption, creating jobs for Liberians, providing access to quality, affordable and improved healthcare, and education, and strengthening and supporting the rule of law.

He also emphasized his support for Liberian girls and women and promised to prioritize issues facing woman and girls as well as parents in the country, among them include matters of single parenting and drug addiction and unemployment among young people.

During the event, Globe Afrique and its affiliates conducted a random interview with several Liberians in Monrovia in person, by phone and through social media. Here are their responses below.

Betty Niminie
A presidential candidate like Brumskine would get my vote if he promises to take a strong stand on crime. Drugs are a serious problem in Liberia. The future of our generation in Liberia is “scary” unless we get it under control now. For now, I am leaning toward Brumskine.

Sam Kanneh
The next president of the Liberia would need to put more resources into our schools and bring credibility and respect back to teachers and the teaching profession. As a teacher, we are the leaders of tomorrow and education is a vital tool to our success. I am glad that we finally see someone putting big emphasis on education, the basics: reading, writing, and arithmetic.

Beatrice Kollie -Weah
I personally believe and feel that a candidate running for president should be a good leader, instead of a follower. That person should also be healthy. Our president should be a patriotic citizen and a very good negotiator. Our next president should be well experienced in government policies––someone who knows the function of every ministry and agency. We need a person who promotes education, job training and job creation and who wants to help the middle class working people. I see that in Charles Walker Brumskine.

Sam Passawe
I think we have several good candidates in this presidential race. That said, there are several qualifications I look for in a presidential candidate. The most important one is honesty. I see that in Brumskine. I believe honesty is a trait that all people should have, especially people that want to be leaders. Another essential trait that a presidential candidate should have is versality. There are a lot of important issues in the world today, and all these issues and events need equal and smart attention. Our next president should be someone with an open mind, a strong character and who understands the trends of global events rather than relying on advisors all the time.

James Tuazama
I am looking for three main things and I have already seen those things in Brumskine. Honesty, ability and intelligence are the three most important qualities I look for in a presidential candidate. Brumskine is compassionate, yet strong-willed. As president, he would be a person who would have respect for all individuals, their professions and families.

Cecelia Gray
Selecting our leaders should not be able popularity because the presidency is not a beauty contest or a movie where the most famous person becomes the lead actor. This election is about Liberia’s future. To be patriotic we as Liberians must vote and ensure that we put in there someone who is prepared. We need to relax and feel confident when our country is represented by a president who knows what he or she is talking about. If we make the wrong decision we will bow our faces tomorrow in shame when our leader goes on the world stage to discuss issues. I am undecided for now but I think I can risk my vote Brumskine because he is knowledgeable and presidential.

Klubo Kollie
I am looking for someone with a stable life. Brumskine has been married to just one wife for more than 35 years and just by looking at them you can see that he is still in love with his school days sweetheart. We need a president that respects and values women and that has a stable and organized family. This is important for us women. I don’t think Liberia can and should afford to put a careless person to lead our country. Brumskine has a stable family – one wife and three loving, well-educated and professional children, all lawyers.