Justin Trudeau, the 44 year old western political star who is also the youthful and energetic prime minister of Canada, makes first African visit as leader of his country, with a first stop in Liberia.

Per sources closed to the Canadian authorities, Trudeau’s choice of Liberia as his first stop on his Africa’s tour was to highlight his belief in and support for women’s leadership and empowerment, and not necessarily that Liberia has served as a model for improved governance, especially so when corruption, impunity, extreme poverty and unemployment are glaring throughout the natural resource-rich West African nation.

Per diplomatic sources, the prime minister next stop on his tour would be Madagascar, where he is scheduled to participate in a summit of the International Organization of the Francophonie (OIF), an organization that groups French-speech nations and France.

While in Liberia, Prime Minister Trudeau played kickball and other games with some Liberian children. He also met with President Ellen Johnson Sirleaf and members of her cabinet as well as the Liberian legislature.

The Canadian prime minister’s visit to Liberia is seen, by some political analysts, as an opportunity for the Liberian government, which has been struggling to maintain international relevance in the wake of numerous problems facing the nation, to improve its governance and commitment to social development.

Liberia’s governance system is fluid, elected and appointed officials are not open to new ideas,  a tenet which generally boils down to greed and the lack of patriotism.  Political commentators say some Liberian officials would prefer to see a new idea that would benefit the country and people die naturally due to political insecurity for their jobs, jealousy and corruption then to see the country benefit.

Several Liberians in western countries have taken new projects and made recommendations to the Liberian administration to improve processes, and bring about systems development, but those ideas were largely halted by lower level and some senior level bureaucrats.

Others say for anything to sail through conveniently with the signature of an official, most officials would have to benefit from a 10% gratuity.  In fact, the Liberian legislature is currently marred in major corruption allegation where some senior level elected officials, included the dethroned speaker of the House of Representative, Alex Tyler and the leader of the ruling Unity Party, Senator Varney Sherman, have been accused of attempting to change the country’s concession laws because of graft.  Both officials have denied the charge and have since defied the presidential taskforce setup to probe the matter.

Supporters of the two lawmakers say the charge against the two men was a witch-hunt by the presidency since the Liberian administration has turned a blind eye on the millions of dollars wasted on expenditures and the millions more that disappeared from the revenue of the National Oil Company of Liberia (NOCAL) during the tenure of Mr. Robert Sirleaf, Mr. Clemenceu Urey and others.

Other cases of corruption in government involved the misuse of Ebola funds and development funds donated by countries like Japan and South Korea.

The Japanese funds disappeared at the Ministry of Foreign Affairs and the South Korean funds by way of material support could not be properly accounted for by the Liberian ministry of commerce and other agencies, including the Liberia Petroleum Refinery Company (LPRC). To cover up the ongoing legal case regarding these funds, some angry Liberians say various tactics including the disappearing of documents at the foreign ministry and the torch of fire at the country’s ministry of commerce, have been employed.

Liberia has numerous problems despite being a very rich nation in terms of natural resources, rainfall, rain forest and a vast sea coast that stretches about 43, 000 square miles.   Its natural resources include diamonds, gold, iron, and fertile land suitable for agricultural food production as well as cocoa, rubber plantation, coffee etc.

Last week, a Liberian diamond concession discovered a new type of diamond in the country, which industry analysts say would go for higher price than most types of diamonds.  Below is the diamond most recently discovered in Liberia, about a week ago.

Despite these riches, Liberia’s children have a very poor education system and most have problems with their weight due to the lack of nutrition and extreme poverty in families, many of whom are unemployed.  These factors affect the academic achievements of students in the country, with most unable to write proper English or solve a simple math problem.

In 2013,  all Liberia students seeking to enter college failed the university admission exam in a nation where lawmakers earn over US$10,000 per month in addition to free vehicles, gas coupons and travel allowances.  Foreign travels and luxury vehicles paid for by the Liberian government for the private use of officials cost the country a fortune. 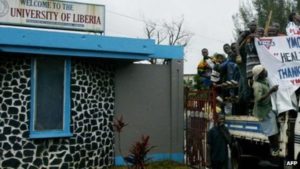 The Liberian education minister in 2013, Etmonia David-Tarpeh , said she found it hard to believe that not a single candidate for the University of Liberia’s admission passed that year’s university admission exam.

Nearly 25,000 school-leavers failed the test for the 2013 admission to the University of Liberia, one of two state-run universities. The university itself is lacking standardized material support. Lawmakers like Senator Jewel Howard Taylor, whose spouse former President Charles Taylor ruined the nation, argued for poor students to pay higher fees to obtain public education while she earns a monthly salary and other allowances in the sum of US$10,000 and more.

The erstwhile Education Minister Etmonia David-Tarpeh who allegedly at one point could not properly defend her ministry’s budget before the Liberian national legislature told the BBC Focus on Africa programme that year that she intended to meet university officials to discuss the failure.

“The students lacked enthusiasm and did not have a basic grasp of English,” a university official told the BBC.

Mrs. Tarpeh  has since been replaced with another minister under whose tenure teachers continue to go on strike.  To date, Liberia’s educational system continues to have more problems while millions of dollars trafficked out of the country into personal accounts.

Per sources and based on investigative analysis, the richest sector in Liberia is the Liberian government.  The private sector is under supported and exploited, and is largely controlled by the Lebanese followed by few Indians, Guineans, Nigerians and others.  Most private consulting firms and banking institutions are largely owned and run by Nigerians and Ghanaians, with the exception of the International Bank which is said to belong to a powerful Liberian political family.

Latest report released by the Liberia Institute of Public Integrity (LIPI) states that between 2006 and now, the Liberian Government spent US$55.3 million on buying very expensive vehicles that have no link to improving the lives of the people.

These expenditures continue to date while the country’s educational and health sectors lag far behind from acceptable standards.   Yet, the administration defends these kinds of spending for the comfort of its officials instead of  investing in relevant sectors that would benefit the entire population.

Several local dailies in the country have highlighted these unnecessary spending with headlines like this, “Liberia: Over U.S.$50 Million Spent On Cars – Education, Health Sectors in Mess,” yet there seems to be no sign of change.

So the question is, why did Canada’s Prime Minister Trudeau choose Liberia rather than Senegal, Guinea, the Ivory Coast or even Ghana where there are modest progress?

A global political analyst in the UK said the international community, including the United States, World Bank, IMF and others are not supporting specific African nations because of the people. Rather, they are supporting personalities who lead those nations.  As such effective, monitoring and evaluation are thwarted by the care and concern for the individual leaders they support.

This statement appears to be true when one considers the recent World Bank’s monetary agreement with and assistance to Liberia to support what the bank referred to as ‘Strengthening Governance Reform’ as reported by a local Liberian daily a day ago in this headline, “Liberia: World Bank Approves U.S.$40 Million for Governance Reform,” The Liberian Daily Observer.

The point is, this is not the only type of assistance given to Liberia since the end of the civil conflict in 2003.  The United States Agency for International Development (USAID) and the U.S. Millennial Challenge Corporation (MCC) along with many other international groups have all given millions of dollars in aid and other support to Liberia in the last decade, yet living standard continues to deteriorate nationwide, unemployment is getting higher every day, and poverty is to the extreme.

Some Liberians interviewed think western nations and the international community should follow U.S. President-elect Donald J. Trump’s prescription for what would be his presumed Africa Policy: Holding corrupt leaders accountable, promoting free and fair trade rather than continuous aid that provides a room for some African leaders to misuse their nations’ tax dollars for personal gains.