“The Liberian presidential debate was like a baby taking his or her first step as a human being,” said the caller who couldn’t wait to discuss his observation of the debate.

“Really?” I asked him as I listened attentively to the ‘political analyst,’ one of many in the Liberian political sphere who believes “we are getting there.”

“Of course, we are getting there,” I said; and there is a reason to be optimistic about future Liberian elections.

“To fulfill our electoral aspirations, however, we need to do more,” I told the caller.

For a country that wants to break away from its once bloody, controversial and primordial electoral past, debating the issues that affects the people and the country, is a way to build trust and confidence in the electoral process.

But how do you get a thorough and comprehensive presidential debate when George Weah who supposedly is a leading contender, failed to appear; or when economist Mills Jones and political newcomer MacDonald Wento, also didn’t care to show up for that crucial debate?

Or, when some of the issues were left out of the debate. I want to know Mills Jones’ position on the economy because of his former job as governor of the Central Bank of Liberia, especially when portion of the debate focused on the nation’s deficit.

I also want to know UPP’s McDonald Wento’s views about the separation of church and state, and his respect or no respect of other religions, and for those who are not members of his Christian faith.

Mr. Wento spoke recently when he explicitly referenced Liberia as a ‘Christian Nation,’ which of course threatens peace and Liberia’s existing relationship with diverse religions and people with diverse views.

Interestingly, candidate Charles Brumskine responded to a question about the nation’s deficit crisis as unimportant to require his attention.

Electoral debates are about bringing a candidate’s views up-close to the electorates, which helps a voter measure and determine the competence, judgment, character, trustworthiness, compassion, and the seriousness of a candidate.

After all, elections are about enfranchising the citizenry and involving them in the process.

And a better way to know the hearts and souls and toughness of a candidate is to parade the candidate before the electorates, to know what he or she thinks about the people and country that the individual wants to govern, which is unheard of in the long history of the Liberian nation.

While I must admit that I am a bit optimistic about the future of Liberian elections after the first-ever (August 17) presidential debate that ever occurred in my lifetime, I am also disappointed about few things.

The debate needed a respected and seasoned moderator- a proven professional who has passion for politics and knows and understands Liberian politics from top to bottom.
Working at a radio station and having a ‘good’ voice and a political science or a mass communication degree is not a qualification to be a moderator.

A good and seasoned moderator sets the tone of a debate; is a good listener and thinker, can articulate the issues, and is fast on his or her feet. When a moderator struggles like the candidates, is a recipe for disaster.

Anyway, I did not hear a question about funding, or a solution about sea erosion in coastal Liberia – and sea erosion in Monrovia that threatens D-Twe High School and the Borough of New Kru Town and surrounding areas.

How are the candidates going to deal with the sea erosion crisis in coastal Liberia? I did not hear a question or questions about healthcare and the issues of affordability and accessibility.

Privileged Liberians and well-connected politicians including President Ellen Johnson Sirleaf, often seeks health care treatments in the United States and elsewhere; while indigent Liberians died daily from diabetes, high blood pressure and other treatable diseases, because they don’t have the money and access to see a doctor and other health care professionals.

I did not hear a question about education and the urgent need to increase the pay of teachers.

The education tragedy of 2013, when 25,000 Liberian students failed the university entrance exam, should be a reminder and a reason to discuss education and how to find practical solutions to such burning national issue of salary increase for teachers, tuition reduction or zero tuition for students, modern labs, computers, electricity, etc.

I did not hear any plan to relieve traffic congestions in Monrovia and surrounding areas, and finding the funds – the money to build Liberia’s bad highways and rural roads. How about the postal systems? Any plan?

How about water and sewer? Any serious policy? Where is the raw sewer going? “Pupu factory?” to continue to make Liberians sick and kill them?

I did not hear any question about the future of the bankrupt national oil company, NOCAL, after the Sirleaf administration told the Liberian people that it was being restructured and reorganized.
Are the presidential candidates willing to discuss possible indictments of those that bankrupt NOCAL?

Any discussion about a war crimes court? How about the TRC report?

The Liberian people are craving for presidential debates. They are not interested in a ‘teaser’ debate – a comedy hour that makes it look like they are stupid enough to sit around and listen to comedians masquerading as presidential candidates.

I am optimistic; but I am not stupid either. 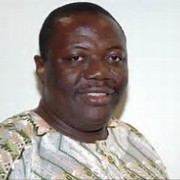 Tewroh-Wehtoe Sungbeh is a Liberian intellectual, contemporary issues commentator, and author resident in the United States.

Presidential Candidate Alexander B. Cummings: A Man of Dignity and Purpose