L/R: Vice President Boakai of the UP and Senator George Weah of the CDC.

NEW YORK–– Liberia’s National Election Commission announced today that the runoff in the country’s troubled and fraudulent presidential election will be held on December 26, Jerome Korkoya, the commission’s chairman said.

“I am pleased to announce that the 2017 presidential runoff elections will be conducted on Tuesday, December 26, 2017,” the NEC boss said.

Liberians had gone to the poll on October 10, 2017, to elect a replacement for Madam Ellen Johnson Sirleaf who had been president of Liberia for 12 years, beginning in 2006. But the election was heavily marred by organized and systemic fraud and irregularities which were clearly engineered by the incumbent president, Madam Sirleaf. 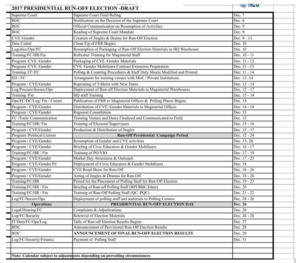 Critics accused President Sirleaf of using the country’s wealth to engage in unwholesome acts aimed at protecting her and her family in her post-presidency.

The Liberian leader is said to be seriously worried and concerned about innuendos that she might likely face charges for war crimes and crimes against humanity in addition to widespread, organized and systemic corruption, and related economic crimes allegedly carried out during her administration which critics say involves her family, cronies, and associates.

Even though President Sirleaf admitted that corruption has been a major setback and problem for her government, she continues to deny being a part of it despite owning millions of dollars in assets overseas in places such as Morocco, South Africa, Kenya, the United States and Canada.

Globe Afrique has also reliably learned that the Liberian leader is bent on securing a political stake for her beloved son Robert Sirleaf and all those with whom he has a very serious and special relationship.  Together, they are forming a political party that they believed could contest the Liberian election six years from now.

Globe Afrique has also learned that the Liberian leader has formulated various theories and is said to believe that interfering in the electoral process would provide the best option for whatever plan is being designed to succeed.

Meanwhile, the fraud and irregularities that caused the October 10 election delay the runoff between the two candidates selected by the NEC’s Chairman Korkoya without any supporting data to back the gains allotted to them.

One of the main presidential candidates, Counselor Charles Walker Brumskine of the Liberty Party filed a lawsuit to the Supreme Court of Liberia.  The suit was supported by two other political parties, namely: the ruling Unity Party and the All Liberian Party headed by businessman Benoni Urey.

Last Thursday, the Supreme Court ordered the electoral commission to proceed with the vote after it was delayed for a month by fraud complaints.  The court also urged the commission to address the factors that led to the fraud and irregularities as well as clean up the voter roll which investigators say is still filled with fraudulent packages that could electorally pollute the runoff.

So far, the chairman of the electoral commission has deliberately refused to make those changes nor clean up the voter registers allegedly on orders of President Sirleaf who he and dozens of election magistrates had a secret private meeting with at her residence some four weeks before the October vote was held.

A top international security analyst in New York said, “the problems with Liberia’s presidential election are far from over as long-standing issues and deep concerns remain unaddressed.”

David Moore, a Liberian based in New Jersey who claimed to know the NEC chairman, said Mr. Korkoya is playing games and creating a potential for disunity and chaos because he has US citizenship and can easily leave the country without a need for a visa.

Several Liberians have accused Chairman Korkoya of a US citizenship, alleging that under Liberian laws, he is unqualified to serve as chair of the electoral commission. In view of these allegations, Globe Afrique has reached out to the state of New Jersey and found out that indeed Mr. Korkoya is a naturalized US citizen who also voted in 2008 presidential election. Whether he has given up his American citizenship is yet to be known.

These challenges would seem to make any possible runoff problematic.  At this juncture, it seems only forceful international intervention or involvement can help solve Liberia’s problems and ensures that the country does not degenerate into an ungovernable state.

Liberia's politics of uncertainty: Another of Sirleaf’s made conflict