Mehbuba Shemsie 24, a mother of one and eight months pregnant, has the health of her fetus checked by a health extension worker.

When I joined the Ethiopian ministry of health in 2002, we were using a health system designed for other countries. Our tiny number of highly trained health providers was concentrated in big cities, far away from the 85% of our people who live in rural areas. This mismatch led to some of the worst child and maternal mortality statistics in the world.

We were committed to saving those lives, but it didn’t make sense to put good money into a bad system. So we built a new one. Launched in 2003 the Health Extension Program gives Ethiopians the services they need, where they need them. We trained 40,000 health extension workers to provide basic information and care to all 100 million Ethiopians. The goal was to put knowledge and power—and, ultimately, responsibility—in the hands of local people.

Don’t let me give the impression that any of this was easy. We made mistakes, and we have shared lessons so that other countries can learn from our experience. But, generally speaking, the Health Extension Program worked—and worked fast. Child mortality dropped by half in just eight years. We had proved our theory. When it comes to the things that save children’s lives—family planning, vaccines, bed nets, basic management of common illnesses—you can bring care to the community.

Maternal mortality, though, was a different story. It went down, but not nearly as much as child mortality. We knew why. To save mothers’ lives, you need skilled obstetric care, and that happens in health facilities. But Ethiopian mothers overwhelmingly chose to give birth at home. Health workers advised women to give birth in health facilities, but they didn’t persuade many families to change.

By 2010, two separate strands of thinking had come together to suggest a possible solution to our problem.

First, the Health Extension Program had always included the concept of model families, early adopters who did things like sleep under bed nets and use latrines—and whose example and leadership we hoped would inspire others. The idea: Model families create model communities, which lead to model districts and eventually to a model country.

Second, our colleagues in Ethiopia’s agricultural ministry had been experimenting with ways to help smallholder farmers use better seeds and modern planting techniques, and they’d had some success encouraging men to advocate within their communities.
We adapted that idea for health and used the model families we’d already trained to lead what we called the Women’s Development Army.

One Health Extension Worker covers a community of 2,500 or 500 families. That’s a world of improvement over the old system, but it’s still too many for each worker to build a deep personal connection with every person under her care. The Women’s Development Army, on the other hand, has 3 million members, one for every six families. They are not health professionals talking to community members. They are community members. 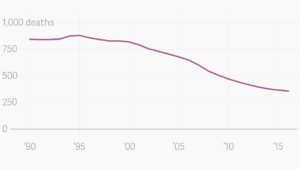 They meet with women in the community every day over coffee ceremonies and every week at church or the mosque, and in short order they have helped change the ecology of childbirth in Ethiopia. Between 2011 and 2016, the proportion of women giving birth in facilities increased from 20 to 73%.

It’s not just that the development army tells women in a community what those of us running the health system think they should be doing. It works the other way around, too. They tell us what the community wants us to do. For example, in the Tigray region, we learned that many women refused to give birth at facilities because they wanted their religious leaders to be present at the birth. Another concern: Women didn’t want to be carried on a stretcher, because others who left the village on a stretcher never came back.

Now, religious leaders come to the health facility, so that a safer birth doesn’t mean a birth divorced from people’s culture. We also designed a new stretcher just for pregnant women. We opened maternity waiting homes where women in their third trimester can stay close to the facility while they wait to go into labor. These were problems and solutions we’d never thought of, but the Women’s Development Army opened our eyes to the community’s needs.

Now that more Ethiopians are delivering in health facilities, there is more work to be done: making sure that the quality of care facilities is uniformly excellent. That means a lot of things, including purchasing more equipment and medicines and training more skilled providers, which we are doing.

It also means keeping the community connected to the health system, which is why the Women’s Development Army will continue to play a pivotal role. We have found a way for Ethiopians to voice their demands to the health ministry. And when you have a demanding society, governments deliver.
. . .
This month, and every September until 2030, the Gates Foundation will publish the Goalkeepers report tracking the progress the world has made in the fight against global poverty and disease, and where we’re falling short. In addition to sharing Dr. Kesete’s experience, the report tells a number of stories about the leaders, innovations, and policies that have made the difference in countries where progress has been most significant.

NOTE: This article was produced on behalf of the Bill & Melinda Gates Foundation by Quartz Creative and not by the Quartz editorial staff.

Creating the Ministry of Information Technology and Project Management in Liberia - An Interview with Mr. Lawrence Kun Kennedy

ANALYSIS: The same family has ruled Togo for 50 years. Will widespread protests change that?