A version of this post first appeared on the author’s personal blog. The views expressed are his own

Despite Africa’s exponential economic growth and development over the past decade and additional support from the international donor community, progress towards many of the United Nations‘ Millennium Development Goals (MDGs) has been slow.

Greater gains have been made over the past 15 years. However Africa’s performance overall continues to lag on health indicators and with that result, the continent is off-track to meet all the MDGs.

In addition, many challenges still face a majority of the people on the continent, including insufficient internal and external resources allocated to achieving the MDGs, inadequate human resources, weak institutional capacity, persistent inequities in access to proven interventions, inadequate statistical health data, and weak monitoring and evaluation capacity.

Looking closer at the specific goals that have an impact on health-related issues on the continent, the following challenges still exist:

More African countries need to scale up preventative healthcare in the fight against the main diseases that cause child mortality, namely measles, pneumonia, diarrhea, malaria, and AIDS. Targeted interventions for newborn babies need to be accelerated, as newborns are more likely to succumb than older children.

A potential solution to this challenge is empowering more women and removing social barriers to their accessing basic services, introducing measures to give poorer families better access to critical services, and increasing the local accountability of health systems.

* Maternal health: The maternal mortality rate for the African region stands at 460 deaths per 100,000 live births. Indeed, only two countries, Eritrea and Equatorial Guinea, are on track to reduce maternal mortality by 3/4 between 1990 and 2015. Most countries in southern Africa have made no progress at all on this target.

Also, one in four women on the African continent who wish to space or delay their next pregnancy cannot do so because of lack of contraceptives. The rates of delivery attended by a skilled health practitioner are very low, especially in West Africa. Lack of access to maternal health services tends to be especially acute in rural areas and urban slum communities.

The cost of accessing prenatal care services (including transportation and user fees), geographical access, and cultural barriers are significant impediments to women seeking care during their pregnancies.

Maternal mortality also remains the leading cause of death in adolescent girls. Poor quality of service for pregnant women is another major concern. In Malawi, for example, a recent study found that only 13 percent of clinics had 24-hour midwifery care, which represents a major hazard for maternal emergencies.

* Combating HIV/AIDS, malaria, and other diseases: Africa is starting to win the battle against HIV/AIDS in most countries, partly due to the significant vertical funding from external aid agencies.

There has been a fall in the prevalence rate, particularly among women, a steep decline in the regional rate of new infections, a reduction in the number of AIDS-related deaths, and a drop-in mother-to-child transmission of the disease. Greater access to antiretroviral therapy, in combination with behavioral changes such as the increased condom usage, have underpinned HIV/AIDS progress in Africa. Susta 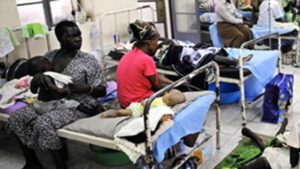 ining access to critical antiretroviral medicines in an uncertain funding environment will, however, present a major challenge to the country’s worst affected by the disease.

About malaria, the acceleration of preventative and control strategies such as the distribution of free or heavily subsidized Insecticide-treated bed-nets has reduced its incidence. Malaria mortality rates have consequently declined by more than 1/3 since 2000. But access to the most effective drugs, namely Artemisinin-based combination therapy, is still limited. Furthermore, the targeting of substantial amounts of donor funding to individual diseases has reduced amounts available for broader health needs.

Tuberculosis remains a major problem in the African region with 500,000 deaths annually, accounting for over 26 percent of notified TB cases in the world. Southern Africa is the worst affected sub-region. While 19 countries have could treat over 85 percent of those affected, the co-infection of TB and HIV as well as drug-resistant TB and multidrug-resistant TB continue to complicate treatment of the disease.