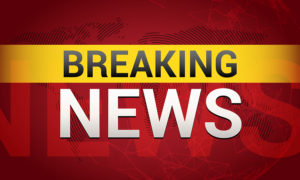 Monrovia, Oct 11, 2017 (AFP) – Counting was under way in Liberia on Wednesday amid reports of problems during a peaceful vote to determine President Ellen Johnson Sirleaf’s successor after 12 years.

The first official results from the presidential and legislative elections are expected later Wednesday from the National Elections Commission (NEC), which has already suggested that turnout was high for Liberia’s first democratic transfer of power in seven decades.

Some voters who appeared at the wrong polling station or were registered more than once were unable to cast their ballot on Tuesday, the NEC said without putting a figure on those affected. The revelations triggered concern from political parties, although the scale of the problem is only just becoming clear.

“For three hours we were in line. When we asked why they are not letting us in, they said they were cooking to eat. We were there until the rain started to fall,” Rachel Johnson told AFP, saying she was unable to vote at a high school in Barnesville, a Monrovia suburb.

Magdalene Brown, 21, was a first-time voter who could not cast her ballot due to problems with the register. “My photo was there but my name was not corresponding. They told me to wait, which I did until 7 pm, but under the heavy downpour of rain I was not allowed to vote,” she said.

The nation’s 2.18 million registered voters made their choice from a crowded field of 20 presidential candidates — including just one woman — and elected 73 parliamentarians for the lower chamber, the House of Representatives.

The vote is seen as a crucial test of Liberia’s stability. Sirleaf, Africa’s first female elected head of state, is stepping down after a maximum two six-year terms in which she steered the country away from the trauma of civil war, but, say critics, failed to tackle its poverty.

Cummings’ ANC party said it was aware of late ballots and voters with valid voting cards being turned away in six counties, saying in a statement it was “confident the National Elections Commission is doing all that it can to ensure registered voters are not disenfranchised”.

A spokeswoman with Brumskine’s Liberty Party also contacted AFP to complain of “registered voters being turned away, NEC saying they are not registered,” in the counties of Margibi and Bassa. If no candidate wins 50 percent of the presidential vote, then the run-off of the top two contenders will be held on November 7.

“We expect 2005 and 2011 to replay itself in 2017,” Ibrahim Al-Bakri Nyei, Liberian political analyst at London’s School of Oriental and African Studies, told AFP.

In both those previous elections Weah’s CDC party and Sirleaf’s Unity Party went into the run-off round of voting. Boakai has the backing of the Unity Party this year. – ‘More resources for education’ – Joe Pemagbi, an electoral observer for the Open Society Initiative for West Africa, said dialogue between the parties in the period before a possible second round was key to avoiding conflict.

“A lot more resources need to be put into civic and voter education, because that’s key to how people respond to some of these challenges,” including frustration over being unable to cast ballots, Pemagbi said.

“People should be pushing for peaceful dialogue and inter-party dialogue,” he added, saying it “is extremely important at this point in time.”

The US State Department hailed the vote as “an important step toward achieving Liberia’s first peaceful transfer of power from one democratically-elected head of state to another in decades.” 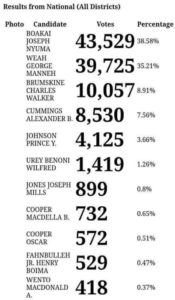 One of Liberia's main parties calls for halt to election results