Subtle whining is being echoed by the people in certain quarters of Monrovia regarding the lip service of the “pro-poor” leadership to deliver public goods and limit public bad. In less than two months, contradictions are rearing their ugly heads in a somewhat unorthodox way, exposing the change mantra as a façade. It is so surprising to some that the new leadership has speedily disintegrated in less than two months, in a way which has further exposed the political farce.

Fresh from the electoral process, the people of Liberia desperate for change, according to the country’s electoral body, the NEC, overwhelmingly reposed their trust in the Coalition for Democratic Change (CDC) led by George Weah to deliver change, limit poverty, and spur prosperity. At least this was the conclusion of most political commentators who scolded the former ruling party (Unity Party) for doing little at addressing Liberia’s grinding poverty and deteriorating standard of living. The generalized assumption was, the new administration headed by a soccer icon, in true a tabula rasa and “soccer dolt,” would have turned the tide around for the better.

And the reality is manifesting itself in the creeping tendencies of nepotism, cronyism, influence-peddling and patronage politics.

Far from this, the people’s hope is being dashed, their aspiration consigned to a heap of ashes, and their hope of a better Liberia is being visited with a political center finger by those who call the shots in Monrovia. And the reality is manifesting itself in the creeping tendencies of nepotism, cronyism, influence-peddling and patronage politics. Those vices which led them to democratically abdicate the Unity party are surging and surfacing with a paraffin speed, thus making the change rhetoric malicious propaganda orchestrated to dupe the unsuspecting masses.

From the nomination of high school degenerates and university dropouts to positions that demand profound knowledge in technical areas to the nomination of the President’s side chicks to positions they have no competence to serve in, thus unveiling the ill-intention of the Weah-led government. The former and the latter groups claim to serve in those positions is predicated on their quote on quote struggle history with the CDC and their intrinsic social relationship with the head of state respectively. Their misaligned intonation reveals that the deafening chorus about change was just a veneer to capture power, to appoint subservient followers and social relations, while the President anesthetize the people with the rhetoric of managing expectation.

To illustrate this, Nyemadi Pearson, the side chick of President Weah heads the lucrative Liberia Petroleum Refining Company, while another side chick of him in Paulita Wie goes as Deputy Minister for Urban Affairs at the Ministry of Internal Affairs. There is speculation, in certain quarters, that President Weah is also on the verge of terminating the contract of James Kollie, as head of Liberia’s Maritime Authority, to be replaced by his other side chick in Safua Gray, even though former speaker Alex Tyler has expressed interest in the job.

While President Weah has appointed his side chicks to lucrative positions in the public sector, similarly, VP Jewel Howard Taylor has influenced the appointment of her family relations and her boyfriend in Mobutu V. Nyenpan to lucrative positions in the government. Public affairs are fast turning into adulterous affairs. While VP Jewel Howard Taylor does it, President Weah, too, is doing the same thing. The new administration is gradually becoming an epic romance drama acted in the Roman Colosseum.

No action plan, no hundred fifty days deliverables, no policy paper has been publicized as the manual the government is using to deliver on the pro-poor change it promised the people.

The CDC-led regime is proceeding on the same trajectory of its predecessor by appointing corrupt individuals to positions of trust, while, at the same time, posturing about running a clean government void of corruption. Such grandiose grandstanding leaves one to wonder whether the leader of this change caravan is either a true change agent or a fake one. In less than two months, he seems to be clueless about governance and what it takes to get the machinery of the state running and working for the people.

No action plan, no hundred fifty days deliverables, no policy paper has been publicized as the manual the government is using to deliver on the pro-poor change it promised the people. The entire public bureaucracy is being governed without a compass, making the public sector an anarchical construction. Also, this reveals the terrible truth that the new regime is lacking in depth to deliver the change that the people are terribly craving.

While this writer thought that the new administration, consistent with the challenges the republic is plunged in, will place individuals with the integrity, competence, and acumen to reverse this ugly trend, this administration has thus trashed my hope and relegated my assumption as wishful thinking. I would have thought that given the economic emergency the country is facing, a team of seasoned professionals and technocrats would have been hired in critical sectors of the country to deliver the basic goods. No, I was thinking wrongly, hoping that the new regime is genuine about change. In true, it is not; the whole change narrative is a pretext to keep the people hoping while President Weah continues to make horrifying nominations in government. 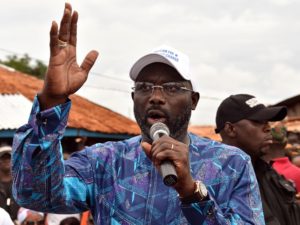 actualization and self-reliance. The President believes that his speeches, that serve as sound bites for news agencies are what can transform a country plagued with economic paralysis and social discards. Those pronouncements, in and of itself, are not supported by the decisive action, they only aggravate the already disillusioned masses who are concerned about their survival.

Such trend is a powder keg for the increment in the exasperation of a broken people bruised on all sides by poverty, diseases, and hunger. Increasing the hope of the people without the consistent policy consideration to match words with deeds is a breeding ground that will culminate into a social discontentment which will have a ripple effect in the state. To some extent, the people seem to be patient; they are hoping President Weah will deliver on his promises, but their patience is not inelastic. There comes a time when they will have to move, and their movement, based on Liberia’s horrid past, has not come without consequences.

Just edging to two months, some civil servants have been shown the ax, while others are heading to the civil service agency for reassignment. They are not reassigning this group because of inefficiency or any administrative malpractices. Instead, it’s because the new administration wants to incorporate their unqualified minions to positions of trust in the public sector, undermining the entire construct of civil service. The new administration’s juggling act will further expand the already bloated civil service budget. Thus, putting more constraints on the administration, and increasing the recurrent expenditure of the government.

When professionals who can run the public bureaucracy are sidelined and repudiated for lousy scoundrels to boss them, one must also be aware that it is just in a matter of days that those professionals will revolt in a manner that will sabotage the operations of the government. Brewing disenchantments among them are low. However, this writer can wager that it is only a matter of time that the chickens will come home to roost, as no man with the credentials and professionalism will countenance such absurdity of misfits and bankrupt individuals being their bosses.

In a country in which the government is the biggest employer, unpaid civil servants are languishing across the county, and with the downward spiral of Liberia’s traditional commodities, coupled with soaring inflation, and the high cost of living, these issues pose looming security concerns. The lamentation is deafening, the people are whispering their discontentment, and the nation is on a cul-de-sac. A cul-de-sac which has a far-reaching consequence for the future, which indicates the current is a prelude to the economic savagery that is expected to befall the homeland.

Alfred P. B. Kiadii is a student of the University of Liberia, who studies Political Science with an emphasis in Public Administration. He is a social and political critic. Contact him at Cell#: +233552176627. Alternatively, he can be reached at bokiadii@gmail.com.

HRW's Letter to the President of Liberia, George Manneh Weah