Ellen Johnson Sirleaf, a ‘Nobel Laureate,’ is the first democratically elected woman president of Africa, but her 12 long years’ administration in Liberia is characterized by a sad and very dark side: Indelible Accusations of Sodomy, Widespread Rapes, Sexual Harassment, and Assault on Women.

Allegedly painted by many Liberian citizens as one of the most corrupt regimes in world’s history, and seemingly the worse in Liberia’s 170 years existence as the administration most engrained in organized, structured and official corruption, nepotism, favoritism and ineptitude; these allegations, many proven as true by both internal and external well-established institutions, including the US State Department in some of its annual human rights reports, the latest accusations from some of the brightest young people who served the Sirleaf’s administration that they have been sexually harassed and requested to be sodomized by higher level officials in the government, and because they refused to carve in, were therefore terminated from their employment, proves more damaging.

Globe Afrique has learned from multiple sources, and as ongoing research, investigations and analysis show, that several young Liberian men and women promoted to high-level positions in the executive branch of the Liberian government as well as those who are economically strengthened or positioned in the country were either allegedly sodomized if they were males, or engaged in lesbian activities if they were females. Those who allegedly refused or rebuffed attempts from powerful officials (both male and females) in government that are accused of conducting these kinds of acts were either terminated or marginalized.

According to reliable and confidential sources, and as preliminary findings of ongoing investigations revealed, almost all of the victims of attempted or actual sodomization, rape, other sexual assault, and sexual harassment seem unwilling to come forward due to stigma, shame and fear of physical and related insecurities.

But Baccus Manipakei Carr, a former young employee of the Liberian Ministry of Foreign Affairs recently challenged the status quo of fear, stigma and shame and came forward with a very explosive revelation, accusing the country’s deputy minister of foreign affairs, Edward Eesiah, of collaborating with the leadership of the ministry to fire him because he rebuffed numerous attempts from the deputy minister, Eesiah, to sodomize him.

Carr, who has a graduate degree (Masters of Laws) in international relations from China’s Foreign Affairs University and has been in the employ of the ministry since 2014, said, “My temptation at the ministry began when I refused to give in to the demands of my boss,” he said. Adding, “He wanted to sodomize me but because I refused, he orchestrated my dismissal from the ministry,” the victim told several local Liberian dailies.

As Globe Afrique’s ongoing research suggests, many young men and women in Liberia are offered or promoted to senior level government’s positions in the Sirleaf’s administration because they are either well connected or formed part of a sexual cave. Carr claims that Deputy Minister Eesiah had promised to promote him (Carr) to the position of assistant minister of foreign affairs if he had accepted the terms proposed––sodomization. According to sources, Carr’s refusal led the deputy minister to organize a spree of fabrications against him, thus leading to his wrongful dismissal.

Like many victims have revealed, it is and has become a pattern in the Sirleaf’s administration for senior level officials to support and protect one another, and sources say, this goes as far as the presidency where some within the Office of the President have made it a norm.

Moreover, Globe Afrique has also learned that several women have and continue to be harassed, intimidated and abused in workplaces (mainly in Liberian government offices) and even in communities by officials of governments and others. These allegations include senior officials and individuals in ambassadorial positions as well as others at cabinet and sub cabinet levels in the government. Globe Afrique’s ongoing research revealed that assault against women and girls is not only condoned by the Liberian government under the continent’s and the country’s first woman president; the Sirleaf’s administration also passively incentivizes such actions.

In 2014, one of the most senior security officers directly linked to President Sirleaf attacked and brutalized a young Liberian woman who only wrong was to advise the official to drive carefully in the street so as to prevent him from hitting poor pedestrians. Instead of prosecuting the culprit/official, the president rewarded the top security official with a more lucrative position as head of security at the country’s National Port Authority ––the gateway to the country’s economy. 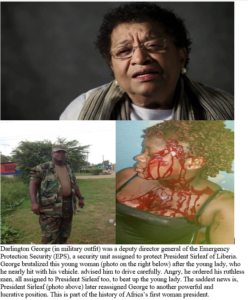 The striking element being created by these kinds of actions is the fact that alleged culprits walk scout free, and in most instances, are rewarded while their victims face institutional intimidation, harassment and psychological abuse through referral to the country’s justice system and security apparatus for unsubstantiated and unfounded criminal investigations, as is the case of Carr who is facing investigations by the Liberian National Security Agency (NSA) for “making terroristic threats” against Deputy Minister Eesiah, his alleged sodomizing abuser.

Sexual harassment is not a new phenomenon in Liberia, what is new though, is that it has become very excessive, and has taken on a new trend, against women such that they are not only punished psychologically, they are also most likely to lose their ability to be gainfully employed, or progress in their employment. Furthermore, these acts are not only a reference to women, they now disproportionally include and affect young Liberian males who are preyed upon by older, wealthy or influential men. Besides, sodomy is generally and historically untraditional in Liberian culture. So, to use it as a form of benchmark for career progress and employment is atypical in that setting. Even if it is to be condoned or done, it has to be done by and with consensus for the following reason.

An increasing number of national and international developments have addressed the fundamental rights of lesbian, gay, bisexual and transgender (LGBT) persons in the West, and to some extent, in developing countries and emerging markets. To that extent, ideals and principles on non-discrimination and equality for LGBT persons have been further developed or reinforced by several nations as well as regional and international bodies including the United Nations, the European Union and much more. Hence, attacks resulting from or based on sexual orientation and gender identity have increasingly been recognized as grounds of discrimination charges in most regional and national legislation as well as international instruments.

That said, Globe Afrique also finds that the equal protection clause promulgated and reinforced in most countries and in regional and international environments forbids subtle discrimination just as much as it forbids obvious discrimination. Therefore, the Sirleaf’s administration, and especially its top officials, must protect individuals who don’t want to be sodomized just as it seeks to protect those who are or want to be gays and lesbians in the country. The government must also protect women who complained about sexual harassment and assaults from powerful and well-connected males in the administration just as it protects the rights of the same powerful and well-connect officials when they are accused by the media for wrongdoing, including for acts of corruption.

As Globe Afrique’s ongoing research continues, what seems to be proven is that the Liberian government, under President Ellen Johnson Sirleaf, has given a sort of cultural endorsement to, and incentives for, forced sodomization, rape, sexual harassment and an assault on women behavior in the workplace in Liberia. Over the past 12 years, since 2006 when President Sirleaf assumed office to now, there have been higher incidences of these kinds of acts in the population, affecting young people at higher rates. Many of these things are to the knowledge of a very powerful Liberian presidency and some are not.

WATCH THIS AFRICAN MOVIE - THE BEAUTIFUL GIRL FROM A POOR FAMILY

President Sirleaf: The chickens could be coming home to roost