NEW YORK–A 1980s registered nonprofit organization, the Association for Constitutional Democracy in Liberia (ACDL) violated the Internal Revenue Service’s regulations and laws of the United States as an American registered and based charity.

The ACDL was founded by exiled Liberian activists and politicians including retired Liberian president Madam Ellen Johnson Sirleaf and others in the 1980s while in opposition to the regime of President Samuel Kanyon Doe.  The organization was registered in the U.S in the state of Maryland as a not-for-profit organization with a tax-exempt status from the U.S. Internal Revenue Service.

According to various testimonies and legal documents from active court cases filed in the U.S, and interviews and testimonies from some of the organization’s past members, the group allegedly deceived the U.S. government and the Internal Revenue Service by raising funds intended for charitable purposes but instead used the funds for non-charitable purposes such as supporting the violent overthrow of a foreign government and the destruction of lives and properties in the West African sub-region.

Testimonies from former Liberian Labor Minister Jucontee Thomas Woewiyou and a former finance manager of the ACDL, the late Harry Greaves, the group raised funds in establishing the National Patriotic Front of Liberia (NPFL) and its affiliate the Revolutionary United Front (RUF) of Sierra Leone.

The NPFL, led by Charles Taylor, waged a fierce battle against the government and people of Liberia, leading to the toppling of the Doe regime in Liberia. For its part, the RUF led by the late Corporal Foday Sankoh waged a bloody war on the people of Sierra Leone to forcibly take state power.

U.S. federal tax laws prohibit nonprofit organizations from engaging in a partisan political activity. Tax-exempt organizations may run afoul of the Internal Revenue Service’s laws if those groups take part in political campaigns for or against a candidate for public office, or a foreign government. Nonprofits that violate IRS guidelines and U.S. laws prohibiting nonprofits from partisan political activity risk losing their tax-exempt status and may also incur tax penalties and possible legal actions. 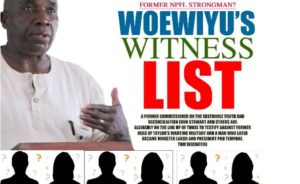 Section 4945 of the tax code sets out guidelines on how nonprofits can participate in nonpartisan political activities without jeopardizing their tax-exempt status. Tax-exempt 501(c)(3) charities have been encouraged to review tax laws carefully and consult IRS publications or legal counsel to clarify prohibitions on political activity. The IRS issues revenue rulings from time to time to help organizations better understand how the ban on political activity works.

Several U.S. prosecutors who opted to remain anonymous say the ACDL, its founders, and members could face serious federal and state prosecution if the IRS determines that fraud was carried out with deception.  In the United States, prevention of charitable fraud is mostly a function of state governments, and laws vary widely from state to state. Approximately 45 states have laws regulating charities and require registration before soliciting donations.

Moreover, non-profits under certain IRS regulations can have vicarious liability for injuries caused by their employees or volunteers to third parties, such as by traffic accidents. For this reason, it is prudent for any non-profit to obtain liability insurance.   A top U.S. analyst and a private investigator said the ACDL hired Charles Taylor as an employee to lead one of its designed project, the NPFL, and Taylor, in turn, hired Foday Sankoh to lead an extension of the ACDL’s mission in neighboring Sierra Leone.  Both employees caused injuries to third parties and violated laws under which the ACDL was registered and should be held liable.  More details on this report and position of the IRS and Trump administration coming soon.