It is interesting to hear from Mr. Jerome Korkoryah, Chairman of Liberia’s National Elections Commission (NEC) say that the ballot papers are in a “secure location under the protection of state security.”

One would think that all elections related materials were kept in such a secure location under the protection of state security from start to finish. Chairman Korkoyah owes the Liberian people explanation on how then did President Ellen Johnson Sirleaf’s former aide Amos Seibo get hold of NEC computers, cameras, printers and voter registration forms to end up in Seibo’s home? 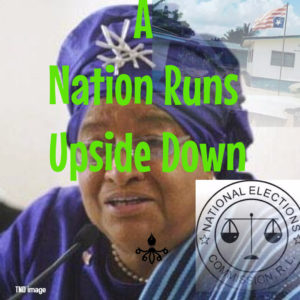 Mr. Seibo’s title in President Sirleaf’s office was coincidentally, “Presidential Deliverables.” Mr. Seibo was arrested at his house along with some employees of the NEC after he Seibo had turned his home into a virtual NEC Printing Press manufacturing voter registration cards. Seibo’s case has “died” in the corrupt Liberian judicial system. Remember Korkoyah said anyone with a voter registration card will be allowed to vote regardless if that person is officially registered to vote. Hello???

It is also interesting at the news conference where Chairman Korkoryah announced the arrival in Liberia of the presidential ballot papers but ironically, he did not provide any updates on the final voter registration numbers. 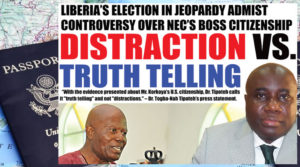 Mr. Korkoyah says the extra ballots are necessary in case in areas where ballots will have to be transported by canoe, “the canoe may capsize” and some voters may “make mistakes in marking their ballots and will therefore need a replacement ballot,” he said. He also said some ballot papers may “damage” and must therefore be replaced.

Where it could get trickier for candidates and voters is the counting of the ballots after voting closes. Hope we can learn from the recent elections in Kenya where the Kenya Supreme Court threw out the results because of fraud.

[tabcontainer] [tabtext][/tabtext] [/tabcontainer] [tabcontent] GENERATIONAL CHANGE DOES NOT MEAN VOTING FOR AND ELECTING A GOVERMENTALLY INEXPERIENCED, ADMINISTRATIVELY UNSTABLE AND DIPLOMATICALLY UNSOPHISTICATED INDIVIDUAL THAT WOULD MAKE LIBERIA A MOCKERY ON THE WORLD STAGE.  THAT’S WHAT ELLEN JOHNSON SIRLEAF WANTS SO THAT HER  TWELVE YEARS FAILURE AS PRESIDENT OF LIBERIA WOULD BE MISSED, AND ALSO CONSIDERED AS RELEVANT IN THE EYES OF THE WORLD.  THIS IS A GAME THAT KORKOYAH MUST NOT BUY INTO FOR THE LOVE AND GOOD OF LIBERIA. /tab] [/tabcontent]

If Liberia is to avoid fraud or minimize fraud, it would be prudent that the votes be counted on the spot at each polling station and the results called in to the NEC headquarters in Monrovia. Any attempt to transport the ballots to Monrovia for counting could result to ballot boxes missing or replaced or the canoe capsized.

The NEC says each candidate/campaign is permitted to have two designated observers at each polling station, and picking the right people with integrity as observers could make and break a candidate’s chances where those with deep pockets will persuade other “observers” to turn a blind eye during the process.

And why did Chairman Korkoyah and some NEC Commissioners go to Ellen’s house for a meeting with her? And why wasn’t NEC Commissioner Jonathan Weedor invited to the meeting as well? “Brown Envelops” politics?

Remember Ellen is also pushing for “generational change” for a young person to succeed her and it is not a secret how she does not want for her native Vice President, Joseph Nyumah Boakai to win this election. But Mr. Boakai will win and we are urging our tribal people to vote for Mr. Boakai.

Is Mark Zuckerberg Poised to become the next US President?

Creating the Ministry of Information Technology and Project Management in Liberia - An Interview with Mr. Lawrence Kun Kennedy