Globe Afrique has learned, from a reliable and confidential source, that the Liberian leader is reportedly planning to do whatever she can to ensure that the ex-Liberian warlord does not harbored ill feelings toward her as she leaves office. The sources say the president and her family are not only afraid of prosecution, they are also afraid of a blowback from Taylor’s loyalists and a vast range of contacts for what is referred to as a ‘betrayal’ of the ex-warlord president.

On March 17, 2006, Madam Ellen Johnson Sirleaf, then the newly elected President of Liberia, submitted an official request to Nigeria for Taylor’s extradition. This request was granted on March, 25 March, whereby Nigeria agreed to release Taylor to stand trial in the Special Court for Sierra Leone (SCSL).

Then, Nigeria agreed only to release Taylor and not to extradite him, as no extradition treaty existed between the two countries.

Three days after Nigeria announced its intent to transfer Taylor to Liberia, the leader disappeared from the seaside villa where he had been living in exile. A week before that, Nigerian authorities had taken the unusual step of allowing local press to accompany census takers into Taylor’s Calabar compound.

According to sources, speculation had ensued that President Bush would refuse to meet with Obasanjo if Taylor were not apprehended. Less than 12 hours prior to the scheduled meeting between the two heads of state, Taylor was reported apprehended on his way to Liberia.

On March 29, 2006, Taylor tried to cross the border into Cameroon through the border town of Gamboru in northeastern Nigeria. His Range Rover with Nigerian diplomatic plates was stopped by border guards, and Taylor’s identity was eventually established.

A US State Department official later reported that significant amounts of cash and heroin were found in the vehicle.

Upon his arrival in Liberia at Roberts International Airport in Harbel, Taylor was arrested and handcuffed by the Liberia National Police officers, who immediately transferred responsibility for the custody of Taylor to the United Nations Mission in Liberia (UNMIL).

Irish UNMIL soldiers escorted Taylor aboard a UN helicopter to Freetown, Sierra Leone, where he was delivered to the SCSL. Since then Taylor, his family and friends have harbored bad feelings against President Sirleaf. Now that she is soon to leave office, sources say the Liberian president wants to correct her mistake in betraying Taylor, the man she used as a poster child on her way to the leadership of Liberia.

Sources say there has been informal communication between Taylor and Liberia on a wide range of issues, including his eventual release and the best way to proceed with the process and to financially and morally support any mechanism that would aid that.

Sources say Taylor is very supportive of his wife taking major political leadership role in Liberia, possibly becoming president in the next year or two. Globe Afrique has learned that President Sirleaf is allegedly on board with the plan and is reportedly supporting the political ambition of Taylor’s wife with the view of making amends with Taylor.

Credible sources say President Sirleaf wants Taylor release, however, she cannot do that as it is very late to do so in her presidency, but she would support any process that would eventually work that out. The source said Taylor is pleased with President Sirleaf’s support for his wife political ambition and preferred political ticket she is using to advance to one of the highest offices in Liberia.
There is chatter in Washington, DC and most western capitals about Taylor’s admission that his movement was financed by Madam Ellen Johnson Sirleaf and a host of others.

Kristof wrote, “The Truth and Reconciliation Commission there listed President Ellen Johnson Sirleaf as one of 52 people who should be sanctioned for committing war crimes; the implication is that she would be barred from public office. I have great respect for President Johnson Sirleaf and have no idea what war crimes she’s ever been accused of. Then the report was pulled from the website without explanation. Can anybody explain?”

Kristof’s article was in response to President Sirleaf’s admission. On Feb 12, 2009 – it was reported that Liberian President Ellen Johnson-Sirleaf apologizes at a truth and reconciliation commission’s hearing…… Ellen Johnson-Sirleaf said she had been fooled by Charles Taylor … She said she had initially supported the rebel chief’s war effort and even … “But I was never a member of the NPFL (National Patriotic Front of Liberia).” Sirleaf said.

Political analysts and few International law experts say these admissions could hunt Sirleaf when and if she leaves office as president because it is now established that Ellen Johnson Sirleaf helped to fund Taylor’s NPFL rebel onslaught against the people of Liberia and other foreign nationals who lived in Liberia at the time.

The source says it is also established through Taylor’s testimonies and other materials that Ellen Johnson Sirleaf, Harry Greaves and other self-professed Americo-Liberians, used a United Stated based Association of Constitutional Democracy in Liberia (ACDL) in the 1990s to muster funds to buy arms and pay for the events of Mr. Taylor’s NPFL rebels forces. Those weapons caused destruction of lives and properties in Liberia; this is according to a letter said to be written by Mr. Harry Greaves. 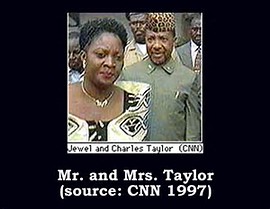 Greaves himself later died few months sometimes ago in a so-called drowning situation in Liberia, days after it was rumored that he had returned from the US and had agreed to testify in a war crimes court on the bloodletting in Liberia.

The sources also said the outgoing Liberian leader is paranoia and deeply worried about who will become her successor. As an opposition figure, she has accused past governments and presidents for corruption and nepotism. She accused Charles Ghankay Taylor and the NPP government of rampant corruption, favoritism, Nepotism and mortgaging of the country’s economy to foreigners, especially Lebanese. She also dragged former interim president Gyude Bryant to court and prison. Bryant later died from frustration and the mistreatment he received from Sirleaf and her administration.

With such precedents coupled with widespread corruption and nepotism during her 12 years as president, the Liberian leader is said to be intimidated and wants to know which presidential candidate would best protect her interest when and if she leaves office. For now, she is reported to be fully supporting the political ticket of Charles Taylor’s liking so that she can mend fences with the powerful ex-Liberian warlord who is said to still enjoy massive support from his loyalists throughout the country.

Another West African official with Dual Citizenship caught in Corruption

Oprah: The most Famous and influential Black Woman Needs an African Tour