The group named “The war Victims of Sierra Leone” say former President Compaoré provided sustained material support and training for the Revolutionary United Front (RUF) rebels in Burkina Faso with the clear instructions to cause bodily, physical and emotional harm to innocent citizens in Sierra Leone in the 1990s and the early part of 2000.

In an interview with Globe Afrique, the spokesperson for the group, Jibril Kposowa said available evidence revealed that Captain Blaise Compaoré, then the number two in Burkina Faso plotted and led the assassination of former Burkina Faso’s military leader Captain Thomas Sankara with the sole objective of using his country as a base to train and support dissidents to cause havoc in West Africa through the request of Madam Ellen Johnson Sirleaf, the outgoing president of Liberia.

The group said Madam Sirleaf used her connection to Campaore’s wife, foster daughter of former Ivorian president Felix Houphouet Boigny, to cajoled then Captain Compaoré into killing Sakara who would have refused to provide access to the sub-region dissident groups recruited by Sirleaf and corps.

The victim group is accusing Madam Ellen Johnson Sirleaf as the founder, architect and principal financier of the National Patriotic Forces Front of Liberia (NPFL) rebels, a parent organization of the RUF rebels that killed, maimed and brutalized civilians in Sierra Leone, as well as  several other regional rebel groups including a sect headed by one Kukoi Samba Sanyang, a former Gambia dissident and the mastermind behind the 1981, failed attempted coup against the Jawara regime. 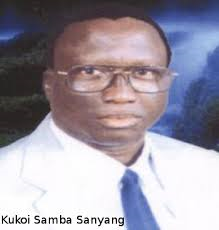 The victim group, which has sent representatives to New York to seek a notable international law firm to represent their interest, say Madam Ellen Johnson Sirleaf founded a bogus US-based 501 ©3 Nonprofit organization, the Association for Constitution Democracy in Liberia (ACDL) to raise funds from Americans and US institutions to organize the NPFL and the RUF, recruit and transport dissidents from one location to the next for training and the execution of brutal activities.

The group says there are other individuals–Liberians, Gambian, Guineans, and Sierra Leoneans—who were recruited in the leadership and operational phases of the NPFL and the RUF who are still available to provide testimony. According to the group, there are also communications and other documents online and in paper form that justified Madam Ellen Johnson Sirleaf’s material support and organizing role.

The accused former Burkinabe president Blaise Compaoré and outgoing Liberian president Ellen Johnson Sirleaf are accused of deriving significant financial benefits from the activities of the NPFL and the RUF through the sales of minerals and other natural resources.

Two prominent New York’s boutique law firms are expressing strong interest in the victim group’s case and pending a lawsuit. A lawyer associated with one of the law firms said, “There is a relevant dossier that manifests that the RUF is estimated to have made an approximate profit of 200 million dollars a year between 1991 and 1999 through illicit diamond trade. These illicit diamonds are widely known to have been traded with Charles Taylor in return for arms and ammunition, which were later falsely identified as Liberian in origin and then legitimately exported abroad, and the proceeds shared by the founders and supporters of NPFL and the RUF, including those accused in the pending lawsuit.”

Adding, “there is a reasonable argument to be made that these victims should be entitled to some form of compensation amounting to $5 billion United States dollars,” he said.

Two private investigation firms have also been working behind the scene to sign on pro bono to help the victims trace the assets of the accused.

The victim plan on submitting an official petition to the UN Security Council, the President of the UN General Assembly, the UN Human Right Commission as well as to the International Criminal Court before filing a personal and collective injury lawsuit in New York, London and France against Compaoré and Sirleaf for “Grave breaches of the Geneva Conventions, such as:
1. Willful killing, or causing great suffering or serious injury to body or health
2. Torture or inhumane treatment
3. Unlawful wanton destruction or appropriation of property.

The above activities are defined as “war crimes” in the statute that established the International Criminal Court. This means both ex-Burkinabe president Blaise Compaoré and outgoing Liberian president Ellen Johnson Sirleaf could face possible allegations of war crimes at the International Criminal Court (ICJ) or specialized tribunals within jurisdictions in West Africa.
Ellen Johnson Sirleaf and Blaise Compaoré met through mutual relation, Chantal Compaoré.

According to reliable research, Chantal Compaoré was born Chantal Terrasson de Figueres, in the Ivory Coast. Her parents were Simone Vicens, who had roots in French Upper Volta (now Burkina Faso) and Dr. Jean Terrasson Kourouma, the extramarital son of the French colonial administrator Jean Henri Terrasson de Fougères, who served for many years as Governor of French Sudan.
Her family was closely related to that of Félix Houphouët-Boigny, the country’s first President from 1960 until his death in 1993. Some sources have alleged that Chantal was actually the daughter of Houphouët-Boigny, who fathered a child out of wedlock in 1961.

She met Captain Blaise Compaore, then Minister of State for Justice of Burkina Faso, on 15 January 1985, when the young military officer visited the Ivorian capital Abidjan to meet with President Houphouët-Boigny. Compaoré had been a part of the Burkinabé government for one and a half years, since he launched a military coup against Jean-Baptiste Ouedraogo in what was then the Republic of Upper Volta on 4 August 1983 together with other members of the “Communist Officer’s Group”. After the coup he put his close friend Captain Thomas Sankara in the position of President. The two had previously been involved in the 1980 coup against Saye Zerbo.

Blaise and Chantal married on 29 June 1985, five months after first meeting. According to most sources, the marriage had been arranged in one way or another by President Houphouët-Boigny, who wanted an ally within the revolutionary left-wing government of Burkina Faso, with which he frequently clashed at the time.

On 15 October 1987, after growing tensions between Sankara and Compaoré, Thomas Sankara was gunned down in a military coup orchestrated by Blaise Compaoré. President Félix Houphouët-Boigny was heavily involved in the coup. Blaise took the position of President, making Chantal the First Lady of Burkina Faso.

Not long afterward, Désirée “Daisy” Delarosa – the widow of Adolphus Tolbert, “foster-sister” of Chantal and god-daughter of President Houphouët-Boigny – arrived in Burkina Faso. Her husband was the son of President William R. Tolbert, Jr. of Liberia and had been murdered in 1980 by the forces of Samuel Doe, who killed the older Tolbert in a coup. Her presence in the presidential entourage, and the close connections between Houphouët-Boigny and the Compaorés, was a contributing factor in the very cold Liberian-Burkinabé relations during the following years, as well as Burkina Faso’s military involvement at the alleged request of Madam Ellen Johnson Sirleaf in the First Liberian Civil War, on the side of Ellen Johnson Sirleaf, and Charles Taylor.

Ex-president Blaise Compaore and his wife (currently reside in the Ivory Coast) now face an uncertain future, with many in Burkina Faso also – among them Mariam Sankara, wife of Thomas Sankara who returned from exile in 2000 – calling for Blaise to be prosecuted.

Senator Chris Coons: Americans pay their bills; Congress should, too