MY TURN: Perhaps, scare to death, President Ellen Johnson Sirleaf who was elected through rigged elections in 2005 and 2011 now wants “free, fair and transparent elections.” The chickens could be coming home to roost.

In the 2005 elections, Ellen Johnson’s cousin, Frances Johnson, without regards to conflict of interest concerns was named Chairman/woman of the National Elections Commission. Frances Johnson-Morris and Ellen confessed to the elections being rigged in Ellen’s favor.

Ellen, of all places, shamelessly narrated at the Abyssinian Black Baptist Church in Harlem, New York City how most Liberian women voters denied food to their children in exchange for their voter registration cards and voted multiple times for their absent children. 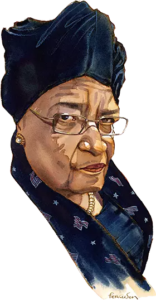 In the 2011 elections, then NEC Chairman James Fromoyan statistically documented how he “switched” the results and gave CDC’s winning votes to Ellen Johnson Sirleaf Vis versa. When CDC supporters protested and demanded a recount, Ellen dispatched her heavily armed police to the CDC party headquarters who then shot, killed and wounded an undisclosed number of CDCians.

Ellen is caught between a rock and hard place and has been switching her support from one candidate to the other, unconcerned about her fate after the presidency while ditching her Vice President Joseph Nyumah Boakai.

Her support is conditioned on assurances not to prosecute her after leaving office.

Sources tell it that she first supported Charles Brumskine of the Liberty Party. But realizing that Brumskine who placed fourth and fifth in both the 2005 and 2011 elections didn’t stand a chance in this year’s election, she then jumped on to the George Weah bandwagon.

But the irony of her reported support to Weah is that Ellen’s nemesis, warlord-turned president and now jail-bird Charles “he killed-my-pa, he killed-my-ma” Taylor had beaten Ellen to the punch and was first to support George Weah. Taylor’s wife is now Weah’s VP running mate.

Ellen now has joined the George Weah-Jewel Taylor-NPFL-NPP camp. Indeed, politics can create strange bedfellows but will this marriage survive?

During his birthday celebration in late January this year, Charles Taylor told his party faithful to “come back home to your base/NPP.”

Charles Taylor: “I may be in jail; but you can never imprison Charles Taylor’s mind,” and he then warned those he said betrayed him of “consequences for their betrayal” ahead.

Could this new political marriage be manifested in Charles Taylor’s farewell message to Liberians as he was forced out as president and into exile in Nigeria: “God’s willing, I will be back,” Taylor said in 2003?
We know too well Ellen’s letter to then Nigerian President Olusegun Obasanjo to turn Taylor who was then living in Calabar, Nigeria over to the United Nations wanted for his role in war crimes committed in Sierra Leone.

To now hear Ellen begging for immunity from prosecution leaves one to ask: what is she afraid of; what is she hiding unless she broke the law?

But because her loyal VP Joseph Nyumah Boakai has reportedly refused to guarantee her immunity from prosecution, Ellen has refused to support Mr. Boakai’s presidential campaign. Instead she has and continues to encourage the exodus of high party officials to leave her ruling Unity Party: Musa Bility, Jeremiah Sulunteh, Harrison Karnwea, Len Eugene Nagbe, Julia Duncan Cassell and others.

At the planned Unity Party fundraising even this weekend d in Monrovia, both party Chairman Wilmot Paye and former Chairman and now Senator Varney Sherman are reportedly said to be opposed to the presence of President Sirleaf at the event and vowed to walk out if she shows up.

And are Liberians visibly observing the high walls going up around Ellen’s Sinkor-Fiemma home and around the Election Commission headquarters; so high you don’t see the buildings anymore? Is that to mean anything?

Varney Sherman is the political fish that knows the dirty Liberian political waters and God told him he had some unfinished business to attend to so he says God saved him from his near-death experience and God told him to support the campaign of Joe Boakai….and what if the quiet Boakai wins?

Former Speaker Alex Tyler who is with the Weah campaign is also licking his wounds while Charles Jailbird Taylor is the scorpion begging frog to ride on frog’s back to cross the treacherous, shack-infested, and crocodile-prone muddy, bloody, deadly political waters of Liberian politics.

Are Presidents Zuma and Sirleaf the Symbols of Failed African Leadership?