A Letter to the United Nations Women 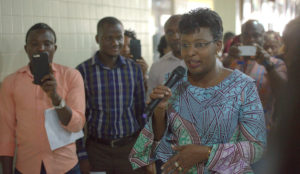 With an innermost sense of grief and sympathy for a 13-year-old Liberian girl who bled profusely to death as a result of being gang-raped on July 21, 2018 in Maryland County by 3 adults, I find it essentially compelling to inform your office about this sad, shocking and disturbing episode – an episode that echoes a stressful memory and traumatic moment.

Rape is becoming an entrenched culture in Liberia if it is not already. The rising wave of impunity and injustice is breeding a fertile ground for this harmful, inhumane, abominable and inimical act to flourish throughout Liberia virulently. The shielding of rape and sheltering of its culprits remain visibly pervasive in Africa’s first independent nation.

The latest incident of gang rape involving a 13-year-old minor in Barrobo Statutory District has seriously provoked me as a youth and student activist to vehemently raise a national and global alarm against this distasteful crime especially in a country where incidences of violence against women and children are smashing and common.

On July 21, 2018, another girl child was gang-raped in Weajah Town, Barrobo Statutory District, Maryland County, according to community inhabitants. The life of this promising child had to end on August 5, 2018, as a result of this uncivilized act. In my opinion, perpetrators of this act must face justice and be made to account for such evil.

Before this 13-year-old girl could die, she did accuse 3 of her neighbors of gang-raping her, namely: Geekor Matu, age 42, Alphonso Gaysu, age 38, and Roland Kwabo, age 18. The deceased girl often assisted these alleged felons by fetching water for them. She was allegedly gang-raped by these men on the night of July 21, 2018, while hauling water for them to bath.

According to the deceased’s father, Benson Nyanti, the alleged culprits threatened to kill his daughter if she had told anyone about what they did. Due to this fear, the deceased’s ailment worsened which led to continuous bleeding. After some women in Weajah Town noticed such bleeding, the deceased was hurriedly taken to the J. J. Dossen Memorial Hospital in Harper, Maryland County for medication.

After two weeks of medication at the J. J. Dossen Hospital, the survivor/deceased was discharged. While home, she began to bleed again. Due to the distance of a health facility, Nyanti’s daughter had to die on Sunday, August 5, 2018, around 8:00 pm while there was plan underway to rush her to J. J. Dossen Hospital in Harper quickly.

Except for Roland Kwabo who is currently in police custody, 2 of the suspects (Geekor Matu and Alphonso Gaysu) are on the run. The General Town Chief of Glofaken, William Seaford, condemned the act and called for increased police presence and patrol. The head of a local CSO Maryland Civil Society Organization, Lucy Jappy Momo, strongly condemned the gang-rape.

(Ref: Follow this link to read more about this rape case via Bush Chicken Online News http://www.bushchicken.com/maryland-gang-rape-results-in-death-of-13-year-old-girl/). It can also be found on other sites. The urgency to follow-up on this gang-rape case could guarantee justice, discourage impunity, and strengthen our collective resolve to fight against this felonious crime (rape) unceasingly.

Beyond this end, I humbly seek your involvement and indulgence to vigorously pursue this case to its logical and legal conclusion in the best interest of this deceased child. With your full and timely intervention into this painful saga, impunity and injustice could for once be curtailed in bold and pragmatic terms.

I plead with you (UN Women) and entreat your partners (GoL/MoGCSP, pro-Women advocacy groups, AFELL, religious bodies and civil society actors) to promptly take full charge of this gang-rape case and demand JUSTICE without any further delay. The culprits of this non-bailable offense must not go with impunity because they did not only commit rape but murder as well.

The deep-rooted culture of IMPUNITY must end now without any further negotiation for family interference, out-of-court settlement, and community mediation or arbitration. Too often, these archaic measures have undermined justice and left thousands of survivors stigmatized for a lifetime. We cannot allow rape and rapists to keep on winning this war. We must defeat them with every fiber of our being!

We must un-shield rape and un-shelter rapists for good. It begins now with this gang-rape case. I encourage UN Women, GoL, pro-Women advocacy groups, civil society actors, communities, religious bodies, INGOs, NGOs, feminists, activists, and media institutions to jointly collaborate in putting an END to all forms of violence against women and children.

This genuine collaboration must begin with ENDING impunity through justice, speedy trial, mass awareness/education, increased campaign, and friendly spaces for children especially girls. The need to protect and enforce every provision in Liberia’s 2005 Rape Law is a matter of national imperative. For instance, Liberia recorded a total of 892 sexual and gender-based violence cases of which 506 were rape cases (MoGCSP Report, Jan. – Sept. 2017). This is horrific!

Ms. Nizigama, the scars of rape and rising violence against women and girls across Liberia are ingrained. The harsh and stigmatizing impact on survivors is aching and sometimes suicidal. This is a catalog of just a few alleged incidences/cases of rape and sexual/gender-based violence lately in Liberia:

These are just a few of the thousands of rape cases just from January 2017 – August 2018. I commend UN Women, MoGCSP, and all anti-rape campaigners/advocacy groups for STANDING UP so far against this national dilemma (rape).

But more needs to be done to tackle to this menace aggressively. We must lift our batons up high against this antisocial misdeed (rape). Our spirit of oneness, resilience, and audacity could bring an end to impunity and finally capture RAPE on THE FRONTLINE.

It is now time for everyone to join this CAMPAIGN because rape seems to be winning the war of late. Rape is undermining the promises made to women, children, and all human beings in international and local protocols to guarantee human dignity, welfare, and best interest. I admonish the UN Women and its partners to upsurge their campaign against rape, especially regarding prevention mechanism.

I call for full adherence and unbiased enforcement of every provision within these legally-binding statutes and principles which are fundamental to protecting human dignity and the inalienable rights of every human being:

Today and henceforth, I am committing my services voluntarily to join you on the frontline so that together we can put an end to these harsh cruelties against our sisters, nieces, daughters, mothers, children, and other vulnerable groups. Enough of this cruelty barbarity! As I grieve over the pathetic demise of this 13-year-old girl (name withheld), I am overwhelmed by uneasiness and discontent.

This uneasiness leads me to recommend thirteen (13) measures that could help to remedy this national tragedy (rape):

Ms. Nizigama, with much courtesy and esteem, I remain optimistic about your rapid response and intervention in this very serious matter. I am hopeful that UN Women along with its partners including government, pro-Women advocacy groups, and human rights organizations will take full charge of this gang-rape case.

IMPUNITY is not an option. JUSTICE is inevitable – It is the foundation for sustained PEACE, genuine RECONCILIATION, national SECURITY, and the consolidation of our emerging DEMOCRACY. Let us STAND UP against this tragedy (rape) to save Liberia and protect Liberians.

US Embassy near Monrovia

The Most Dangerous Cities In The World

The Most Dangerous Cities In The World