Zimbabwe held its collective breath on Sunday evening as they waited for a live broadcast from the state house in the capital Harare. Mugabe, flanked by the generals who initiated a de facto coup against him, read a speech that sounded like nothing the public expected.

HOLDING ON
A defiant Robert Mugabe won’t step down after his party fired him.

the hours leading up to the address, viewers in Zimbabwe and neighboring countries were expecting the 93-year-old president to step down. Earlier in the day, the ruling Zanu-PF party fired Mugabe as leader and recalled him from the presidency. In unprecedented public defiance, they issued the ultimatum that Mugabe must resign by noon local time Monday (Nov. 20), or risk impeachment.

Perhaps, however, the background music of cheerful marimba sounds should have been a clue that this was not going to be Mugabe’s end. During the live broadcast, Mugabe read from a prepared speech that emphasized resuscitating the economy. When he lost his place, general Constantine Chiwenga reached over to help him find his spot. The gesture was a far cry from the general’s threat to “step in,” which triggered the current political turmoil. 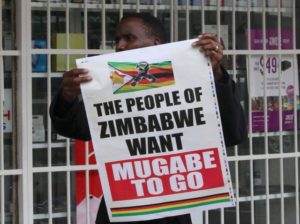 The military’s move on Nov. 15 to take over the state broadcaster, and place the president under house arrest, “did not amount to a threat to our well-cherished constitutional order, nor was it a challenge to my authority as head of state and government,” Mugabe said.

“Whatever the pros and cons of the way they went about registering those concerns, I as the president of Zimbabwe and as their commander in chief do acknowledge the concerns they have drawn my attention to and do believe that these were raised in the spirit of honesty and out of deep and patriotic concern for the stability of our nation and for the welfare of our people,” Mugabe said, in his typically longwinded style.

He also “acknowledged” the concerns of the thousands of people who marched against him in Harare, Bulawayo, and South Africa on Saturday. During the marches, members of the public congratulated the military for standing up to Mugabe.

Of his own party, Mugabe took a conciliatory tone, saying that “established players” should embrace and welcome new points of views of younger members. This would be done within the established hierarchy at the party’s upcoming December conference, over which Mugabe said he will “preside.” With a curt “I thank you and good night…asante sana, siyabonga,” it was clear that Mugabe has no intention of stepping down soon.

Lynsey covers southern Africa from Johannesburg. Before joining Quartz, Lynsey worked as a correspondent for the Associated Press, covering breaking news and features in southern Africa. Earlier, she was a producer at the South African 24-hour news channel eNCA, where she reported from several countries in Africa, including Zimbabwe, Ethiopia, Madagascar and Rwanda. She holds a master’s degree in journalism from Columbia University and a master’s degree in international relations from the University of the Witwatersrand.

Is President Ellen Johnson Sirleaf The Deceiver in Chief?