The ceremony was graced by family and friends that included guests Beyoncé, Kim Kardashian, Eva Longoria, Ciara and sister Venus.

The couple recently welcomed a baby, first child both, and barely three months after they said: “I do.”

The tennis star who has 23 Grand Slam titles and increase added a beautiful baby to union with Ohanian has made it official with her wedding to her man. 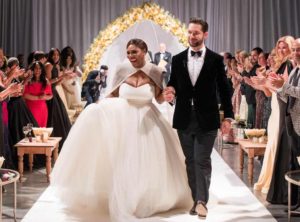 Sources say the star announced on April 19, 2017, that she was taking a leave from tennis until 2018 because of her pregnancy.

Born September 26, 1981, Serena has become one of the greatest female tennis players in American history.

Blama G. Konuwah resides in Vancouver, Canada. He is a public issues analyst and senior contributor to Globe Afrique.

Why Ellen’s Presidency May Likely Continue Beyond January 15, 2018