The Case for a Brumskine Presidency
Part I: Character and Integrity

Charles W. Brumskine (CWB) has devoted his life and career to making the Republic of Liberia a fairer, just and equitable society. Generous with his personal resources, magnanimous toward antagonists, accommodating with dissenting and contrarian views, scrupulous in his jurisprudence, ever the willing and available public servant – not forgetting his commitment to family and faith – CWB represents a model of the caliber of public leadership Mama Liberia so desperately craves.

CWB exudes a generous spirit, never holding back denying those who come seeking a gift for food, school fees, or medicine for a sick child. He does not trumpet his generosity to garner public recognition; rather he follows the teaching of Jesus who said, “Do not let your right hand know what your left hand is doing.” Countless students across Liberia can point to CWB as the silent benefactor who kept them in school. He wisely employed his hard-earned resources to provide scholarships to students who agreed to spend their vacation in their home villages. He has been generous toward those with fewer opportunities. Market women can testify that he personally indemnified their loans to ensure capital for small businesses that provided food, tuition, funds for hospital visits, and a sense of security.

His deep and abiding faith teaches and demands fairness toward all antagonist. “Bless those who persecute you”, he was taught from an early age. And CWB is known to bless his adversaries. Though forced unnecessarily into exiled by the NPP-led government in 1999, he has never spoken negatively about any of his former colleagues. On the contrary, he has endeavored to build bridges, recognizing that reconciliation is the clearest path to national healing and sustained nation building.

The next shepherd of Liberia’s democracy must be tolerant and accommodating of dissenting and contrarian views. CWB radiates just the kind of personality and disposition required in our next president. He is calm, reflective, confident, assertive, accommodating – possessing a big heart and wide open arms. He welcomes a spirited debate and will hold his ground; he is quick to recognize and embrace a good idea even if it differs from his point of view – precisely the temperament we seek in our leader.

His jurisprudence exemplifies his devotion to his fellow citizens. Like his father – the giant and gallant legal hero of countless improvised Liberians, Hannibal Brumskine – CWB believes that the law must equally serve all citizens. He believes the law serves not just the purposes of the rich and well-connected, but, like the Cross, the law is the equalizer of all men. Consequently, CWB has represented both affluent and poor clients, always employing the law to advance quality of life for all Liberians.

Moreover, CWB is ever the enthusiastic and available public servant. On a sultry Monrovia evening in late 2015, he shared a plate of sushi with friends at a local restaurant overlooking the Gulf of Guinea. The ambience of the evening was appropriate for a couple of hours of conversation. They talked about politics, history, current events, food, faith and many other topics. Just before dinner ended, CWB shared elements of how he would govern Liberia when given the opportunity. His disclosure was a concise and thoughtful explication of his governing philosophy; it was evident that he had given much thought and prayer to his response. He spoke about King David, Israel’s greatest military and political leader, as a model of the kind of leadership required to lift Liberia. He spoke lengthily about David’s faith, David’s fairness, and David’s fortitude. Listening to him, it is evident that he places premium stock on public service. His heart radiates the kind of selflessness that we seek and demand in our next president.

He has spent the last 42 years with his college sweetheart; this is a man who stands by his commitment. Together, CWB and Estelle have raised three wonderful children.

Finally, the glue that holds his character and integrity intact is his unwavering submission to the Lordship of his Savior Jesus Christ. His deep personal relationship with Jesus Christ affords him a Kingdom perspective that informs his public service. CWB loves the Lord and he brings that love of God – and fear of God – to the presidency of Liberia. 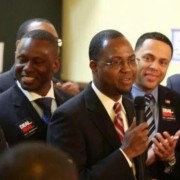 Peter Paye Yarkasah is a Liberian and a U.S. trained policy and communications specialist. He can be reached at: kasah70@yahoo.com

The US Must Accept North Korea As a Nuclear Power