In a bid to be re-elected in 2011, Africa’s first female President signed an official contract with all Liberians through a solemn pledge consisting of twenty promises. As part of those 20 promises, these were Madam Sirleaf’s words to all Liberian voters during the campaign period in 2011:
1. We pledge to ensure that Liberian businesses/companies have increased access to finance.
2. We pledge to ensure double-digit growth to address poverty.
3. We pledge to ensure no fewer than 20,000 jobs every year.

After yet another presidential tenure and with just 6 months to go, are these pledges being fulfilled? The reality on ground is that these pledges are being fulfilled in the interest of foreigners, and not Liberians. These promises are being fulfilled to protect foreign companies and investors, and not Liberian-owned companies and entrepreneurs. It is only in Liberia that foreign companies are given exclusive leverage while credible local companies are made vulnerably inactive. It is only in Liberia that a foreign hotel will be given a whopping 30-year tax holiday while high taxes are harshly imposed on a group of struggling Liberian-owned hotels. Isn’t this unimaginable, mind-blowing and unpatriotic?

It is only in Liberia that our government will serve as a guarantor for a bogus Chinese-owned company (East International Group) in a shady US$59.5 million Pre-Financing Loan Agreement. Can the government of China do this for a Liberian-owned company? Liberian businesses and companies can never have access to increased finance when they are being unpatriotically sidelined by those in authority. The reduction of poverty and creation of 20,000 jobs every year can only be a dream come through when local enterprises and Liberian-owned companies are prioritized in the recovery, rebuilding and reconstruction process of our nation. 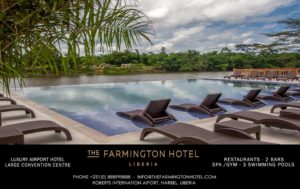 I thought President Ellen Johnson-Sirleaf made a commitment to Liberian-owned businesses in paragraph 1 and 2 under Economic Renewal in her January 16, 2006 inaugural address when she said “The task of reconstructing our devastated economy is awesome…..Yet, we have the potential to promote a healthy economy in which Liberians can prosper. We can create an investment climate that gives confidence to Liberians.”

After almost 12 years since this promise was made, genuine steps are yet to be taken by her government to protect local businesses and entrepreneurs. Protecting foreign businesses for ravenous and temporary gains has been the primary interest of this government. We can never take control of our economy until our government reverses its bad economic model and begins to put Liberian businesses first. Over 81.86% of our people are living in destitution and Liberia is the 4th poorest country worldwide simply because of such perverse decision or bad deal orchestrated by our government.

Patriotism has become a taboo under Africa’s first female President while nationalism is a felonious crime. Accountability is now prohibited while greed remains a major public policy. Corruption, nepotism, inequality and economic sabotage are key drivers or pillars of our nation’s development agenda. The rush to amass illicit wealth by those in authority through covert agreements is sky-scraping and sickening. The interest of the nation no longer matters to stewards of our resources. What is wrong with our leaders in Liberia? Are they really leaders or looters?
In January and April of this year, a group of Liberian entrepreneurs under the banner Patriotic Entrepreneurs of Liberia (PATEL) staged a protest calling on government to reduce taxes on local businesses and major imports. For the very first time in our country since 1847, our local currency is fast depreciating. The exchange rate is now L$120 – US$1. Who does this affect? The poor or the rich? The bourgeoisies or the proletarians? Public service nowadays in Liberia is an attractive gold mine for sophisticated zombies, puppeteers and charlatans. This trend has to change if Liberia and Liberians must rise above misery.

Up-to-date, our government has given deaf ears to these patriotic Liberian entrepreneurs. Prices remain soaring on our markets mainly as a result of this high imposition of taxes on Liberian-owned businesses while flexibility or leverage is given to foreign businesses by our government. Why give a 30-year tax holiday or tax break to a Lebanese-owned hotel when no Liberian-owned hotel has ever received a tax holiday for even 6 months? Isn’t this a crucifixion of our 1975 Liberianization Policy?

The government is seeking to give a whopping 30-year tax holiday or tax exemption to Farmington Hotel, a foreign business owned by Lebanese businessman George E. Abi Jaoudi. While Corina Hotel, a local hotel owned by Liberian businessman Sam Mitchell, is struggling to improve its facility on 24th Street and at the same time pay huge taxes, our government is endeavoring to exempt a foreign hotel from paying taxes for 30 years. This is never done in Ghana, Senegal, Ivory Coast, Guinea or even Sierra Leone.

For instance, Ghana revised its investment laws to ensure more protection for Ghanaian entrepreneurs and businesses in 2013. What is wrong with Liberia? Isn’t this a crucifixion of the 1975 Liberianization Policy? While Belle Casa, a Liberian-owned hotel operated by a local businessman Amin Modad, is struggling to compete with foreign hotels and at the same time pay huge taxes, our government is prioritizing Farmington Hotel. Why couldn’t our government give tax holiday to Jackies Hotel in Nimba County or Buchanan Hotel in Grand Bassa? Where does Liberia’s interest lie? Isn’t this a crucifixion of patriotism and nationalism? Will Farmington Hotel provide free services after receiving this 30-year tax break?

The Joint Committee on Investment and Concession & Judiciary and Foreign Affairs of the House of Representatives are currently reviewing this 30-year tax break. In my opinion, this should not even be reviewed or discussed considering its skeptical, unreasonable, unjustifiable and unpatriotic nature. Whose interest is Farmington’s Hotel? The Legislature must act promptly in our best interest by trashing this unpatriotic agreement. If you cannot do it for Liberian hotels, who else then? If you cannot protect Liberian businesses, who else then? Isn’t it our right to reap the benefits of being called Liberians? Or, is it a curse to be a Liberian?

Reliable information reaching us indicates that this foreign hotel is the interest of Aunty Jenny Bernard, the sister of President Ellen Johnson-Sirleaf, who many refer to as the ‘de facto’ Prime Minister of Liberia. Why give preferential treatment to a foreign hotel, and not a local hotel? The preference of a foreign business over a local business is in blatant violation of Section 45.1 and Part V Section 46 of our PPCC Law. How long will our leaders be so cruel to their own people?
Today, our government is awarding over US$2 million contract to Mutual Construction Company, a subsidiary of a bogus foreign Company (East International Group Incorporated) to install the sidewall pillars along Tubman Boulevard. Aren’t there qualified, competent and credible Liberian-owned construction companies to do this sidewall? Aren’t there capable Liberian engineers to do sidewall?
It is sad that these very same foreign companies are hiring Liberian engineers/contractors for peanut especially after receiving millions through shady deals. So, are Liberian engineers and companies only good enough to be subcontracted? Are our engineers only good enough to build plank bridges, lay blocks, transport cement and sand, sell crush rocks, bend steel, draw house plan and serve as casual laborers for foreigners and foreign companies?

It is a glaring fact that the predominant interest of “Leaders” in Liberia is to distribute mass poverty, and not to reduce it. They care more about cruelly pocketing millions instead of combating hardship. When they steal these millions through bogus agreements and concessions, they deprive vast majority of our people from having access to quality education, better healthcare, good roads, profitable jobs, electricity, safe drinking water, food security and improved housing.

The number of hardcore pillagers under President Sirleaf far exceeds the number of patriots. The PRS was never meant to reduce poverty, but to replicate it evident by the increasing number of slum communities across our nation. Does this suggest that the legacy of President Sirleaf will be engraved on sand, and not stone? We call on all political parties and political leaders to muster the courage and speak against these ‘rush hour’ contracts and bogus agreements with just 6 months to a new government. Why is this government creating such financial burden for the next government?

We call on civil society organizations and the media to join this campaign of PUTTING LIBERIA FIRST and protecting its sovereignty. The youth, religious and traditional leaders have a choice to stand up now, otherwise they risk losing a lot. Our short and long-term expectations from this government and succeeding governments respectively are:
1. Put Liberia and Liberians’ interest first by upholding the Liberianization policy and PPCC Law.
2. Award contracts below US$10 million exclusively to Liberian-owned companies and predominantly involve Liberian-owned companies/businesses in contracts costing more than US$10 million.
3. Ensure all audit reports and those linked to corruption and economic sabotage are independently investigated and prosecuted.
4. Increase access to financing for Liberian-owned businesses.
5. Create a strong system of governance, transparency and accountability to prevent nepotism (family interest), conflict of interest (kickbacks) and corruption/economic sabotage during concessions and contracts.
With 109 days to 2017 elections, the masses of our people are watching and they will decide the political fate of incumbent lawmakers who will support this thoughtless and wicked 30-year tax break in favor of Farmington Hotel. Surely, the PEOPLE will decide your fate. The PEOPLE are watching and PAY DAY will come soon. The PEOPLE will meet those who continue to compromise their interest and mortgage their resources at the polls. Surely, that day is in sight and nearing when the marginalized voices of our people will rise again. Surely, that time is just 104 more days away when all of our PEOPLE shall march to the polls with optimism to redirect their socio-economic and political destiny. LIBERIA FIRST, LIBERIA LAST – We must all protect his glorious and nationalistic heritage.

About The Guest Speaker: Martin K. N. Kollie is a Liberian youth and student activist, a columnist and an emerging economist who hails from Bong County. He currently studies Economics at the University of Liberia and is a Lux-in-Tenebris Scholar. Martin is the youth ambassador of the International Human Rights Commission and a loyal stalwart of the Vanguard Student Unification Party (SUP). He can be reached at: martinkerkula1989@yahoo.com