The history of Liberia is unique on the entire Continent of Africa. The country started neither as a native state nor as a European colony. It began in 1821 when private American societies, which consisted of white religious and political leaders, decided to find a home outside North America to relocate blacks they considered “undesirables”. That’s how the country called Liberia, on the West Coast of Africa was ‘founded’. Over time, the indigenous inhabitants and the settlers (those from North America) developed a unique behavior and stereotypes that are only unique to Liberians.

Prior to the Liberian nightmare called civil wars that devastated the country and its people, the country was the envy of her neighbors. It was considered a ‘melting pot’, like New York was to America. People came from all over Africa, the United States, and the Caribbean. Also, Liberia was called a Quilt or a Tapestry. Prominent amongst its famous immigrants and families were: Edward Wilmot Blyden, Alexander Cromwell, Thomas J. R. Faulkner, Edward J. Roye, Arthur Barclay, Edwin Barclay, Charles D. B. King, the Tubman, Tolbert, etc. Along with the indigenous population, a unique culture evolved; some of which the distinctive Liberian handshake are, Liberian English, cuisine, stereotypes about each other and a behavior that foreigners described as “Liberians answered the question with questions.”

This peculiar behavior was put to a test by a Nigerian visiting student who had come to Liberia to complete his Ph.D. dissertation about the “Liberian Culture and Social Behaviors.” He was in for a treat! His field study consisted of questioning little children, adolescents, adults, and older people. He conducted his study in the streets and the communities.

On the first day of his field study, he went on Broad Street, Monrovia; there he met a young lady toting lots of books; he greeted her and said to her, “Young lady, are you a student?” Her response was, “Why do you want to know?” “Is it only student that tote books?” “Oh, so it is true that you Liberians answer questions with questions?” The young lady’s response was, “Who told you so?” He then said, “I have conducted a research for my Ph.D. dissertation and the subject I am writing on is: “Liberian Culture and Social behaviors”. The young lady happens to be a sophomore student at the University of Liberia (LU). The Nigerian said, thank you, I am sorry for taking up your time, and he went on his way.

The next person he encountered was an older gentleman who appears to be in his late 40s. He met him on Ashmun Street. The Nigerian student greeted him with his usual polite pleasantry; “How do you do?” and then said to him, “Sir, may I ask you few questions?” (In British-Nigerian accent) Before he could ask his first question, the elderly gentleman said to him, “Young man, are you from Nigeria?” The young man reluctantly said “yes.”  Then the elderly gentleman followed it up with, “Where in Nigeria are you from?” “River State” was his answer. The Nigerian then said to him, “Sir, I am conducting a field study for my Ph.D. dissertation and the subject I am writing about is: “Liberian Culture and Social behaviors”. I would like to know “Why is it that every Liberian that I questioned, respond to my question with a question?” “What is the question you asked them? And how many Liberians have you met so far to come up such ridiculous conclusion?” “Sir, I believe Liberians are a unique people in West Africa, and out my curiosity, I want to find out where this uniqueness comes from”. “What do you mean by us being unique? Is this one of your Nigerian stereotypes about us?” asks the elderly gentleman. From that point on, he allowed the Nigerian to speak for a while, and then said to him, “Young man, I don’t want to appear rude to you; why is it any of your business to know that we answer a question with questions? Young man you have wasted my time, I’ve got to go, maybe the next time we meet, I will have the answers you are looking for;” then he said goodbye and left.

From here on, the young Nigerian got frustrated, but he decided to try his luck with small kids who he felt will answer his questions; he believed they were innocent. He took a cab to UN Drive near the Barclay Training Center (BTC); the area where the Merry-go-Round playground is located. He was determined to prove that it was not possible for most Liberians to answer a question with questions. Being convinced, he approached bunch children between the ages of 7 and 8 years old. He approached a small girl who was about 7 years old; he said to her, “How are you?” In response, the small girl said, “What are doing here speaking to me?” “Do you know me?” The Nigerian responded, “I want to ask you one question.” The small girl’s response was, “Did my mother tell you to talk to me?” The Nigerian reacted with disbelieve. In frustration, he said out loud, “Dawn, this can’t be true!” The small girl’s immediate reaction to his statement was, “Oh! Oh! Why you use that bad word?” She held her hands over her mouth; the Nigerian apologized, said bye and left.

While he was leaving the park, he was stopped by an elderly woman who overheard the conversation he held with the small girl. She said to him, “Young man, you look very disturbed, what is the problem?” “What were you saying to that little minor?” His response was, “I am through asking these Liberian people questions. How in the world all of them answered me back with questions?” He threw up his hands in the air and said, “This is not only interesting, it quite remarkable!” In response, the elderly lady said to him, “That is nothing compared to some of the stereotypes we have about the various ethnic groups; one such stereotype is about the Klao (Kru) – it is believed that ‘Peace was in heaven until the Kru people got there.’”  The Nigerian did not say a word; he left running as if someone was chasing after him.

I don’t know what became of his dissertation project; since Nigerians are a determined set of people in Africa, I presume, he completed it somehow. 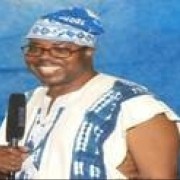