The landscape of Addis Ababa

Ethiopia’s economy is booming, and despite the country’s current political turmoil, the IMF thinks the good times will last.

In 2000, Ethiopia, the second-most populous country in Africa, was the third-poorest country in the world. Its annual GDP per capita was only about $650. More than 50% of the population lived below the global poverty line, the highest poverty rate in the world.

What has happened since is miraculous? According to IMF estimates, from 2000 to 2016, Ethiopia was the third-fastest growing country of 10 million or more people in the world, as measured by GDP per capita. The country’s poverty rate fell to 31% by 2011 (the latest year Ethiopia’s poverty level was assessed by the World Bank).

The fastest growing economies of the millennium 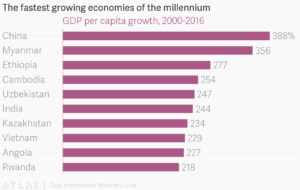 The outlook for the next five years is bright. In its latest global forecast, the IMF projected that Ethiopian GDP per capita would expand at an annual pace of 6.2% through 2022—among countries with 10 million or more people, only India and Myanmar are expected to grow faster.

Ethiopia’s economy has been growing rapidly since 2003 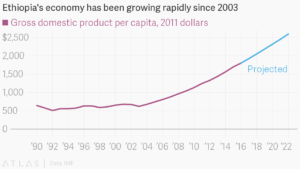 Any country making such progress would be cause for celebration, but because of its size, swelling population, and the depths of its poverty, Ethiopia’s gains are particularly heartening. By 2050, the UN expects the country to grow to 190 million people, from around 100 million today, making it among the fastest-growing large countries in terms of population, too.

The 1970s and 1980s were a period of political and economic turmoil in Ethiopia. The country was led by the brutal military leader Mengistu Haile Mariam, and during his reign, the country faced civil war, famine, and failed socialist development policies. Since 1991, the country’s political situation has been relatively stable, and rising living standards have followed.

Ethiopia’s economy is concentrated in the services and agriculture sectors. The World Bank estimates that of the 10.8% average annual growth recorded by Ethiopia between 2004 and 2014, half came from services, like hospitality and transportation, which was mostly a result of country’s urbanization (pdf). Agriculture, meanwhile, accounted for 3.6% of the growth during the period. Improved agriculture production was mostly a result of the adaptation of improved seeds and chemical fertilizer, according to International Food Policy Research Institute.

Manufacturing, though a small portion of the economy, is burgeoning, growing at more than 10% per year. A recent study by the Center for Global Development, a US think tank, concluded that Ethiopia was the most likely country in Africa to become the “New China.”

Still, Ethiopia faces a variety of issues. Though the current government has overseen a growing economy, it has suppressed dissent, and there are concerns it favors certain ethnic groups and regions of the country. More than 500 people died in clashes between the police and ethnic groups protesting the government’s creeping authoritarianism that began in late 2015. More recently, confrontations between ethnic Oromos and ethnic Somalis in the southeast of the country led to at least 30 deaths and 600 displaced.

If the country is able to overcome its political instability, the economic opportunities are immense. An increasingly educated population, improving infrastructure, and investments from China, give Ethiopia the chance to maintain its place among the world’s brightest development stories.

Sign up for the Quartz Africa Weekly Brief — the most important and interesting news from across the continent, in your inbox.

Beware of Wolf in Sheep Clothing