Ex-Liberian Warlord President Charles Taylor, here being arrested and sent to The Hague

Sources within the Trump administration stated, it’s troubling how quickly Liberians have forgotten their terrifying civil war including the rape of women and young girls along with the events that led to, at least, 250,000 Liberians dying in a senseless civil war – now, they are allowing convicted warlord Charles Taylor and his aides to influence the upcoming presidential elections. It appears history is about to repeat itself in Liberia with the name Taylor being the underlying manipulator.

The coalition between Mr. Weah’s party Congress for Democratic Change (CDC) and Charles Taylor’s National Patriotic Party (NPP) – headed by Taylor’s ex-wife came about in 2016 after Weah held several conversations with Charles Taylor – who is serving 50 years in prison for war crimes committed in Sierra Leone.

Decides that, to prevent former Liberian President Charles Taylor, his immediate family members, in particular, Jewel Howard Taylor and Charles Taylor, Jr., senior officials of the former Taylor regime, or other close allies (including Melvin Snowe) from using misappropriated funds and property to interfere in the restoration of peace and stability in Liberia…” to freeze all assets of these individuals, especially assets and wealth acquired from blood diamond and stolen public funds.

According to reports collected from the BBC News Service, candidate George Weah now has some of Taylor’s closest aides around him. One can surmise these aides include the same group that led to Taylor’s brutal campaign in Liberia and Sierra Leone and his eventual incarceration for war crimes.

Agnes Reeves Taylor, 51, was recently arrested in east London and charged with four counts of torture she allegedly committed during the West African nation’s civil war. She has also been charged with three counts of intentionally inflicting severe pain or suffering on an individual or groups.

Some Liberians we spoke with are convinced that Taylor’s former aides will pressure George Weah to lead Liberia down a destructive path just like Charles Taylor.  Others are concerned Mr. Weah is putting himself in a political crisis because of the risk that Jewel Howard could potentially become President if Weah were incapacitated as per the Liberian constitution.

Charles Taylor has many close allies and followers in Liberia – many of whom served as fighters in his army. Today, some are willing to bring Charles Taylor back to Liberia because they believe Taylor owes them a reward for fighting in his army.  Some of these die-hard fighters include Kuku Dennis who is said to be campaigning for Weah and Jewel Howard Taylor nationwide, using funds from Taylor’s blood diamond resources during his war days in Liberia and Sierra Leone where thousand of women and children were maimed and brutalized.

The fear of Charles Taylor’s involvement and manipulations in Liberia’s election or having some of his close aides working directly with George Weah has aroused concerns in Washington, DC, and London. These fears are being sensed by many Liberians who believe the international community will withhold investments in Liberia because of Taylor’s influence in a possible Weah administration.

“Liberians are their own worst enemy,” says Sarah Johnson, a mother of three who witnessed her mother being raped during the civil war. “We saw what Charles Taylor and Ellen Johnson Sirleaf did to our country – we turn around and elected Ellen – now we are suffering because her children have stolen and sold all of our resources. Now, instead of trying someone new, we are allowing Ellen and Charles Taylor to come right back and influence our elections through George Weah…sometimes, I think we deserve God’s punishment because we are foolish!” 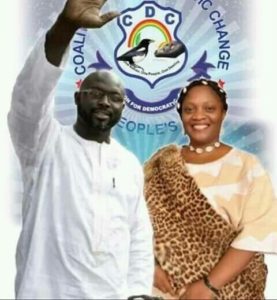 Ms. Johnson’s anger comes from rumors within Liberia that president Ellen Johnson-Sirleaf is also supporting Weah and Taylor, but for more nefarious reasons – to eventually grant state power to her son Robert Sirleaf who sources say wants to become senator of Montserrado County, replacing Weah on the CDC’s ticket in the meantime.

Charles Brumskine of the opposition Liberty Party, who ran in the 2005 and 2011 presidential elections, is said to be one of the top candidates in the 2017 election.  Brumskine promises to reconcile and rebuild the country with hopes of enticing foreign firms to invest in Liberia.

Liberia’s current Vice President, Joseph Nyumah Boakai, is also said to be a top contender. Despite Liberia’s poor ranking on Transparency International index as a country loaded with corrupt public officials, Vice President Boakai along with Mr. Brumskine have never been implicated in issues of corruption.

Adolphus Arietta, 48, who lives on the outskirts of Liberia, believes ‘many Liberians are supporting other candidates including Charles Brumskine, Joseph Boakai, and Alexander Cummings because they want peace and stability and a leader who doesn’t have issues with the international community.   A top UN diplomat in New York remarked: “Liberians can go ahead and decide who they want as their leader; however, they should accept the consequences later.”

According to data from the World Bank and United Nations, there are over 35,000 Liberians living in the diaspora. It appears many of whom have refused to return home due to an 85% unemployment rate, poor infrastructure and a lack of access to basic social services including healthcare and clean drinking water.  According to the U.S. Immigration and Customs Service, there are roughly 10,000 Liberians at risk of deportation from the U.S. due to President Trump’s refusal to renew a deferred action program.

The Liberian economy heavily relies on foreign aid, a substantial percentage of which comes from the U.S. and other foreign partners. These partners, it appears, opposes Charles Taylor’s interference and influence in the country’s political renewal or his indirect return to power through his wife or surrogates.

Many young Liberians who are supporting the return of Taylor to power through surrogates and his (Taylor) relatives including his wife, Jewel Howard Taylor, do not understand the international implications at hand as well as the consequences to come few months or years from now.  What is even more troubling is that many of the young people who support this effort were either ex-combatants or children born during the conflict and who have never been de-traumatized.

More shocking is the fact that Weah, a former soccer star with limited political and government experience, lacks an in-depth understanding of the challenges and skills needed to rebuild Liberia.

As Liberians decide their fate, one thing certain: either the country faces international isolation and hardship, or prospers and becomes a part of the international community as a nation of international standards that do not reward criminality and those affiliated with it. Each Liberian that votes on Tuesday, October 10, 2017, has one and only one decision to make: Country and prosperity or Taylor and isolation?