Unity Party is in a free fall due to the factional battles within its ranks. With such fast degeneracy, the lack of coherence in its central command, porosity of strategy due to massive leak, coupled with the no money syndrome, a George Weah presidency engineered by the witch plutocrat Ellen Johnson Sirleaf is on the horizon.

This writer maintains that the result from the first round of the presidential polls is an indictment of a regime that was blessed with twelfth years to deliver on basic social services and ameliorate the standard of living of the people, but spectacularly failed to address basic survival issues. Instead of focusing on providing practical solutions to nagging challenges, this regime prided itself in fumbling with theoretical postulates and discussing abstract concept void of addressing basic social issues.

The Party does not have the luxury of time to garner the forces and recalibrate in a runoff that is about to decide the final winner of the contestation. In the ranks of the party, the Ellen faction led by Eugene Nagbe and his cohorts are bent on undermining the party’s effort simply because they have been shown the exit door by the bravado high liners led by Cllr. Varney Sherman and his poster boy in Chairman Wilmot Paye.

Attempts to put the broken pieces together so the party can emerge as a strong and united force in the runoff is a dream in wonderland, as all sides are expressing unwillingness to smoke the peace pipe for the sake of the general objective. This lack of coherence in the party will cost it the runoff, considering the fact that their opponent in the Coalition for Democratic Change has a sound ground work complimented by a solid internal organization, which has been lacking for the past two elections.

Analysts are quibbling that the sour relationship between President Sirleaf and the party is due to the rift between she and Cllr. Varney Sherman and Chairman Wilmot PAYE. The two kingpins of the Party have been embroiled in a conflict with the President since the inception of her second term. According to the two men, their bitterness with the President stemmed from her refusal to prioritize the employment of partisans of the party that went in the trenches to secure its victory in 2011.

New hostility between the two men and President Sirleaf took center stage when Cllr. Sherman used his privileged opportunity as orator of Liberia’s Independence to send volleys of punches to the President for her lethargy in resolving structural issues of governance ranging from corruption to unemployment, poverty etc. As for Chairman Paye, his was during the 2014 Special Senatorial Election when he seized the opportunity to throw nuggets of verbal missiles at the then Heir Apparent, Machiavellian Co President, and the De facto Prime Minister in Robert Sirleaf for masterminding the prematurely pull out  of the Party’s candidate in the election.

After recuperating from a life-threatening illness, in recent time, Cllr. Varney Sherman reignited the impasse between he and the President at a program in the Township of West point; he boastfully said that the party does not need the support of the President to win the presidential election, hinging on the argument that he won the senatorial election of Cape Mount void of the support of President Sirleaf.

Many commentators have tagged Cllr. Sherman as a political man who does not know the rules of engagement, or somebody without an understanding of tactic and strategy in politics. His comment of late against the President has further soured the relationship between the Party and the President, and he thus dropped the ball on that issue.

Sherman’s assertion could prove correct if the party had a massive grassroots support complemented by funds to run its campaign. As it stands, the party lacks the funds to discount, the organizational framework, and the gusto to discount the support of president Sirleaf. Many of their key members are junior ministers in the government who are not prepared to abandon their fat salaries to engage the process with the ferocity of their existence.

In addition to such situation, the Party is experiencing insolvency, as ranks and file are openly scolding the media team for during little to articulate the success of the party to the Liberian people. Aggrieved partisans are saying that the media team lacks depth and spine to take on a Coalition for Democratic Change which has demonstrated superior propaganda firepower during the first round of the presidential polls.

As it stands, a divided Unity Party with all the attendant challenges, is inadvertently delivering the presidency to the CDC on a silver platter. Yes, in the public the elements of the Party will put a brave face, but in private they admit to the disintegration of the Party. Unless there is a dramatic change in the activities of the Party, the clock is ticking towards the end of its hold on power.

The views expressed herein do not reflect the position of Globe Afrique.  They are the opinion of the author, a Liberian citizen and student at the University of Liberia 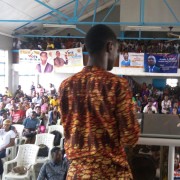