In 2016, South Sudan’s president, Salva Kiir, endorsed then Republican nominee for president, Donald J. Trump, Sr., over Democratic nominee Hillary Clinton.  That does not stop the Trump’s administration from being tough on him and his rogue officials.

WASHINGTON, DC –The Trump administration has imposed sanction on few senior officials and three companies in South Sudan for what the administration considered as a deliberate attempt to obstruct peaceful co-existence.

The U.S. Treasury and State Department announced the sanctions on Wednesday, according to a statement released.

According to the release, the action on Wednesday freezes any assets that Information Minister Michael Makuei Leuth, deputy defense chief Malek Reuben and former army chief Paul Malong have under U.S. jurisdiction. The three are also barred from entering the United States.

The U.S. accused the three officials of engaging in actions that lengthened South Sudan’s intramural conflict and obstructed efforts to establish peace.

After breaking away from mainland Sudan, South Sudan has been stalled in conflict between government and rebel forces since December 2013. The two sides signed a peace accord in 2015, but the accord shattered a year later when army troops, reportedly operating under orders from Malong, attacked a rebel base in the capital, Juba.

Since then Malong was put under house arrest in Juba after falling out with President Salva Kiir on an unrelated matter.

The country’s deputy defense chief Reuben is accused by the Trump administration of profiting from the war. In addition, the US imposed sanctions on four companies he is believed to own or control.

Makuei, for his part, has been accused by the US for helping to organize attacks on U.N. peacekeepers and obstructing humanitarian aid from reaching people in need.

With these tough actions, analysts say criticisms that the Trump administration does not seem to have a policy on Africa may be proven to be wrong, as the administration pushes back on expectations it seeks from African leaders and government. 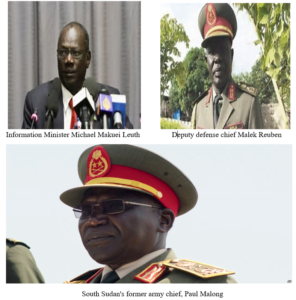 An outside associate of the Trump administration, in speaking with Globe Afrique on Saturday, said the administration is not following the roadmap of previous U.S. administrations on Africa because actions taken on and regarding Africa did not help Africans, instead, they emboldened and appeased rogue regimes as well as incompetent and corrupt leaders.

“Not sending wasteful aid, which of course is tax payers’ money from poor American workers, does not mean the Trump administration does not have a policy,” he said.

The surrogate said, “The best policy toward Africa, a very wonderful continent with tremendous wealth and resilient people, is to stand on the side of the African people against some of the rogue governments and corrupt leaders on the continent.”

“Giving constant humanitarian aid and relief support that do not impact the lives of the people because of corruption on the part of their governments and officials are not the best way to continue dealing with Africa,” he added.

Several analysts and professionals associated with think tanks in Washington, DC lauded the trump administration’s action on South Sudan, one calling it “appropriate, timely and actionable.”

Globe Afrique has learned that some serious-minded Africa’s advocates in the administration are pushing for similar actions against other African leaders and officials who steal public funds and deposit them into foreign banks outside of the African continent.

A Republican strategist told Globe Afrique that pursuing stolen wealth and sending that back to the continent would be the best foreign assistance the U.S. can give to African countries.

He named countries like Nigeria, Liberia, Sierra Leone, Senegal, South Africa, Kenya, Uganda, South Sudan, Egypt, Togo, Equatorial Guinea, the Gambia among others as nations whose citizens have been shortchanged by corruption, mismanagement and the lack of accountability.

“Look at Nigeria where its ex-oil Minister Dieziani Allison Madueke embezzled billions of dollars, bought lavish properties around the world, including a mansion in the state of Virginia where her children live in wealth; Liberia where a few group of families, including that of the country’s president, cronies, friends and officials took the country down the drain in the last 12 years; Guinea where its former Minister of Minister and Geology racked up millions to purchase luxury properties and live a comforting life in the West,” he said.

“The assets of these people need to be traced around the world and forfeited. This would be the best international aid western nations can ever give to Africa and its people,” he added.