Caritas International is a confederation of 165 Catholic relief, development and social service organizations operating in over 200 countries and territories worldwide.

Collectively and individually their claimed mission is to work to build a better world, especially for the poor and oppressed. The first Caritas organization was established by Lorenz Werthmann on 9 November 1897 in Germany. Other national Caritas organizations were soon formed in Switzerland (1901) and the United States (Catholic Charities, 1910).

Since taken over as head of Caritas Freetown and as vice president of Caritas Africa, Father Konteh has been making a huge difference in the lives of poor and ordinary people.

A Reflection from Father Konteh

This is one of the Lord’s great precepts: that his disciples should shake off everything earthly as though it were dust… to let themselves be carried heavenward in one great impetus. He exhorts us to overcome sleep, to seek what is above (Col 3:1), to keep our spirits constantly on the alert and cast from our eyes seductive sleepiness. I’m talking about that torpor and lethargy that lead people to error and fabricate the images of dreams: honor, wealth, power, grandeur, pleasure, success, profit or prestige…

To forget such dreams, our Lord asks us to rise above this heavy sleep: don’t let us allow reality to vanish in a frantic pursuit of nothingness. He asks us to keep watch: “Gird your loins and light your lamps” (Lk 12:35). The light that dazzles our eyes casts out sleep, the belt that clasps our waist keeps our body alert. It expresses a striving that does not tolerate any torpor.

How clear the meaning of this image is! To gird one’s loins with temperance is to live in the light of a pure conscience. The lighted lamp of sincerity lightens one’s face, makes the truth break forth, keeps the soul awake, makes it impermeable to falsity and foreign to the futility of our feeble dreams.

Let us live according to Christ’s demands and we will share the life of angels. For he unites us to them in this precept: “Be like servants who await their master’s return from a wedding, ready to open immediately when he comes and knocks” (Lk 12:36). They are the ones who are seated by the gates of heaven with a watchful eye so that the King of glory (Ps 23[24]:7) may pass through on his return from the wedding. 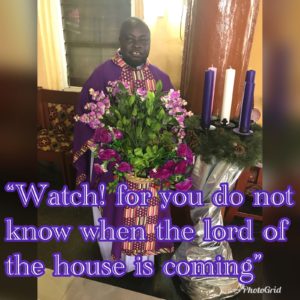 Reverend Father Peter Konteh is a Catholic priest ordained on 9th April 1996 at the peak of the 10-year brutal civil war in Sierra Leone. Fr Peter as he is fondly called began social work over 30 years; well before his ordination to the priesthood.

Growing up in a devout Catholic family Fr Peter demonstrated a remarkable passion for service; first among the street children in the congested squatters and slums of Freetown. He went on to support Catholic priests and the local community in the service of the people of God in various ways.

He subsequently decided for a dedicated service to God as a Catholic priest and entered the college seminary for priestly formation.

The priestly formation leading to studies in Philosophy and Humanities has been enhanced with further professional training and hands-on experience in various aspects of pastoral, humanitarian and relief work. The appetite to serve is duly reflected in his outstanding leadership in the Church and development work.

Fr. Peter drew a lot of strength and direction from his pastoral duties as Parish Priest in both rural and urban communities in the Catholic dioceses of Bo and Freetown. He is as willing to take on tasks as he is innovative, and results orientated.

During the civil war, he joined like-minded colleagues to establish the Inter-Religious Council and they grew into an integral part of the peace architecture that facilitated the dialogue between the Government of Sierra Leone and the rebels of the Revolutionary United Front (RUF). And when was not in Church or on the field, he could be heard on BBC reporting on the ravages of the war, to make up for the absence of journalists who had fled the country or closed their business altogether.

During the 10-year brutal civil war in Sierra Leone, he also worked in the management of camps (for both refugees and internally displaced persons) and resettlement of refugees. His successes were duly awarded by UNHCR as an outstanding Camp Management of remarkable integrity.

His passion for humanity energized him to continually support war affected and suffering people irrespective of their faith, or nationality. He coordinated food and non-food items for refugees in Guinea, while at the same time pushing for the respect of the right of these refugees.

As he grew in pastoral and social work, he will not lose sight of passion for child protection, and duly established the St Mary’s Children’s Home in 1997 in Bo, to care for war orphans whose parents were killed, maimed and disabled and unable to care for their children. St. Mary’s Children’s Home has thrived over these years and accounts for the university students today.

After the war, he supervised the reconstruction of the Catholic Hospital at Serabu, in partnership with the European Union. As director of the diocesan development offices of the Archdioceses of Freetown and Bo, he implemented wide-ranging socio-economic projects for various other development and established a partnership with a lot more, including ….

As President of the Confraternity of Priests in Sierra Leone, the priests of Sierra Leone have duly acknowledged Rev Fr Peter Konteh is a leader.

His commitment to support and care for others, often manifested in his drive to raise funds and seek sustainable development interventions in both communities and national levels, in and out of the church, continues to affirm him as the Executive Director of the Archdiocesan Development Office/ Caritas Freetown, a solid partner of peace and development.

THE DECEIVERS REDUX - HOW THE SIRLEAFS ARE RIPPING OFF LIBERIA

IGJ Proposes Amendment of Chapter 2 of the New Election Law of Liberia
April 2, 2020