Such is the commanding lead built up by George Weah, the star footballer turned politician, in the first round of presidential elections on 10 October that his nearest rival, Vice-President Joseph Nyumah Boakai, will struggle to bring together enough votes from the other candidates to win in the second round.

In the country’s first post-civil-war vote in October 2005, Weah, then 39, outpaced his many rivals, sweeping most of Liberia’s 15 counties and leading his nearest rival by close to 10% of the votes. In the run-off the following month, Ellen Johnson Sirleaf forged a coalition of the losing parties, defeating Weah by nearly 20 points and becoming Africa’s first elected female president.

This election promises something quite different. In the first place, despite a roster of 20 candidates, Weah, now 51 and running on the ticket of the Coalition for Democratic Change (CDC), won 39% of the votes on 10 October (against 28.3% in the first round in 2005) to 72-year-old  Boakai’s 29.1%. Boakai, the candidate for the ruling Unity Party (UP), is universally respected as a modest and honest advocate for Liberia’s neglected rural areas, but the bit-players that he could rely on in a run-off polled so badly that he would have to mop up almost all of their votes to beat Weah in next month’s run-off. This is unlikely.

In the months leading up to the election, Boakai antagonized the third-placed candidate, the Liberty Party veteran Charles Walker Brumskine, by turning him down as the running mate, an alliance that Johnson Sirleaf urged on the Vice-President. Brumskine polled about 10%. In the event, Boakai lost badly in Margibi, the home county of his running mate, the former Speaker Emmanuel James Nuquay, who had been hailed as a formidable choice because of his national profile. The fourth-placed candidate, Alexander B. Cummings (Alternative National Congress), draws support from the same young urban demographic as Weah. With Cummings off the ballot, most of these voters are now likely to switch over and back Weah.

Prince Yormie Johnson of the Movement for Democracy and Reconstruction has long indicated that he would throw his weight behind Boakai in the event of a run-off, but he got only 7% (down from 11.8% in 2011). Boakai also polled strongly in Johnson’s Nimba County stronghold, indicating that he may not need his support that much. Prominent figures such as businessman Benoni Wilfred Urey and Henry Boima Fahnbulleh performed so poorly that their impact on the run-off will be negligible. But Boakai has already started talks with some of the losing candidates, knowing that for him every vote will count.

Splashes of cash
Are Liberians ready for a footballer, albeit a former World Player of the Year, to replace a Nobel Prize-winning president? To Liberia’s educated elite, proud of their country’s history as Africa’s oldest republic, the prospect once seemed scandalous. In the run-up to the October polls, however, Weah attracted intellectuals such as Toga Gayewea McIntosh, a former Foreign Minister and latterly vice-president of the Economic Community of West African States’ commission (Ecowas).

Weah’s running mate, Senator Jewel Taylor, is also seen as competent, although many are uneasy about her relationship with her former husband, the convicted war criminal Charles Taylor. The prospect of a Weah presidency in a country as fragile as Liberia induces deep anxiety.

No one doubts that Weah is public-spirited. At the height of his career in Europe in the late 1980s and 1990s, he still visited Liberia often and bankrolled the national team during the civil war years. He is said to have spent more than US$2 million of his own money on football and charitable causes, including education for children from the slums he grew up in.

Yet, his record as a senior legislator has been indifferent at best, if not downright mediocre. He is inarticulate to the point of incoherence and boycotted the two presidential debates before the October vote for that reason. He has a very short attention span in meetings with diplomats and officials, including his party’s executive, and is impatient with written briefs.

Weah long ago depleted his fortune but his campaign was well funded: he flew from town to town in a chartered helicopter from Côte d’Ivoire – his photo and party’s logo boldly emblazoned on it. He has refused to declare his assets or explain the sources of funds in his campaign war chest. United Nations, Ecowas and African Union diplomats say they suspect Weah got support from three sources: Qatar, a network of Charles Taylor‘s friends, in and outside of Monrovia, and his own network of international soccer professionals.

In March, he admitted speaking with Taylor on the phone after reports circulated that Taylor had masterminded the formation of the CDC – which includes Weah’s own Congress for Democratic Change, Alex Tyler‘s Liberia People Democratic Party (LPDP) and the National Patriotic Party, which Taylor founded in 1997. The National Elections Commission registered the CDC officially on 29 December 2016.

A voice recording of Taylor urging his supporters to vote for Weah was widely circulated by the CDC, and some even boasted that once elected, Weah would get Taylor out of prison. Alarmed by the disinformation, the European Union office in Monrovia issued a statement stressing that Taylor is locked up for good.

Many in Monrovia, educated Liberians and foreign diplomats alike, deplore Weah’s lack of transparency. He is a mute presence in both the Senate and the Ecowas Parliament – which he visits only to collect the stipend paid to members. No one is clear about what a Weah presidency would look like.

Perhaps the only figure able to counter Weah’s momentum is President Johnson Sirleaf. Uncharacteristically, Johnson Sirleaf remained silent as her Unity Party’s standard-bearer Boakai stumbled towards his loss in the first round. A victory for Weah would jeopardize Johnson Sirleaf’s legacy. The pro-Taylor faction in the CDC nurses a deep grievance against her for handing over the former warlord for trial by the Special Court for Sierra Leone. She is unlikely to be left in peace should Weah win.

Ma’s silence
Yet Johnson Sirleaf had appeared to relish the prospect of Boakai’s defeat. Speaking at the UN General Assembly meeting in September, she said it was time for a younger generation to take over leadership in Africa, an obvious snub.

People in Johnson Sirleaf’s inner circle say she bears genuine malice towards the Boakai campaign. Generous and loyal to friends, Johnson Sirleaf can be unforgiving and even vindictive if spurned or disappointed by them. UP leaders, including the party’s former chairman Varney Sherman, a central figure in Boakai’s inner circle, angered Johnson Sirleaf by refusing to endorse Robert Sirleaf when he was campaigning for the Senate, forcing the president’s third and favorite son to run as an independent and be mauled by Weah.

Although his position as vice-president for 12 years was ceremonial and largely powerless, Boakai’s attempts to ignore his role in the Johnson Sirleaf government was barely credible. ‘I was a race car stuck in the garage,’ he complained to reporters. Johnson Sirleaf’s allies bristle at Boakai’s slogan ‘Our ma spoil it, our pa will fix it’. 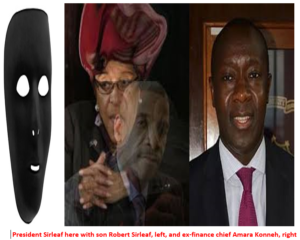 Johnson Sirleaf has consistently promoted younger politicians. She appointed Amara Konneh Minister of Finance in his early forties and later lobbied for his appointment to a top job at the African Development Bank as leader of its fragile state unit. Konneh, a close friend of Robert Sirleaf, remains a favorite of the President. She had wanted Konneh to feature on the UP ticket but Sherman and others – believing that Konneh’s bid would be stymied because he is from the small, mainly Muslim, Mandingo tribe – spurned the idea.

Another young politician she promoted was the former Foreign Minister Augustine Kpehe Ngafuan. But Ngafuan, angered by Johnson Sirleaf’s preference for Konneh on the UP ticket, resigned amid preparations for the 2015 UN General Assembly. He, too, is now part of Boakai’s inner circle, and one of the reasons why relations between the President and the Vice-President are so tense.

It is clear that Boakai is unlikely to win the run-off without explicit support from Johnson Sirleaf, who is best positioned to mastermind a coalition that would include the likes of Brumskine.

With the third presidential run-off to pit the UP against the CDC, and many smaller parties showing signs of making no difference to the electoral process (AC Vol 58 No 16, After Ellen), the fractious Liberian political scene is likely to congeal into a two-party state. This will make voter choice easier, electoral campaigns less messy and uncertain, and the party system stronger. But in the absence of clear policy or ideological differences, it may also prompt the emergence of ethnic, tribal or regional politics.

Ethnicity did play a role in this year’s election, as in 2005, but in the form of an inchoate tendency to ensure that no one of Americo-Liberian (or ‘Congo’) origin would win the presidency. This has been a strong tendency since Charles Taylor, an Americo-Liberian, removed himself from the presidency in 2003. Johnson Sirleaf won in 2005 and 2011 by stressing her Gola roots as the daughter and granddaughter of illiterate rural women.

Nonetheless, many still perceive her as Congo because she grew up in Monrovia among that elite group and has tended, they say, to promote Congo interests in government. This was one reason why when she promoted Brumskine, a scion of an old Congo family, as a potential running mate for Boakai, UP decision-makers deflected the move.

As it happens, although at least six Congos or half-Congos ran for president, none will appear on the ballot in November. Some diehard anti-Congo Liberians already see this as a victory, regardless of the outcome of the run-off.

The Real Game: The Charles Taylor’s Agenda Versus The Ellen Johnson Sirleaf's Agenda

'We slept out in the open air like wild animals'