For those of us who live in Canada, disagreeing with US President Donald J. Trump, Sr would pose no imminent threat to us whatsoever. So, why I would rarely agree with the American leader on many of his policies and more so, his utterances, I can’t help but agree that we share the same position on the United Nations, particularly its political and social relevance.

President Trump has famously remarked that the UN is “outdated” and needs some “major overall.” I think he is all but right. And, I share that view since hearing about the recent appointments made by the UN Secretary General in naming the world’s body panel of experts on taxation.

I say so as a Liberian citizen resident in Canada. I also say so because I find it appalling for the UN Secretary-General António Guterres to appoint an individual to a panel of expert committee without considering what he or she brings to the table.

As a Liberian, I am glad and honored for the consideration of Liberia to the world body of tax experts. Hence, the commissioner-general of the Liberia Revenue Authority, Ms. Elfreda Stewart Tamba has been designated by President Ellen Johnson Sirleaf and appointed by the UN Secretary General as a member of panel of tax experts for the world body. This appointment was, of course, based on the lobbying and recommendation of Liberian president Madam Ellen Johnson Sirleaf.

My question to the UN scribe is: What does Ms. Elfreda Stewart -Tamba bring to the table? In my estimation, I would say she brings personal wealth accumulated by her and her masters and their cronies in the Liberian government. Apart from that, there is nothing to be seen or desire.

With all due respect to Ms. Stewart-Tamba and patriotism to my country, I can affirm that Liberia, under President Ellen Johnson Sirleaf, does not have a tax system considerate for admiration. The Sirleaf administration has no direct or indirect policy on taxes, especially on tariffs. What they do is to coerced money and other resources out of the poor and struggling Liberian population. In addition, they tend to squeeze Liberian small and large businesses just to enrich a few people.

One reason why thousands of Liberians overseas have no interest in exporting goods and other materials to their native country is because of high tariffs at the Freeport of Monrovia. Apart from the government squeezing exporters and importers, the entire system is filled with corruption. Under an Elfreda Tamba Liberia Revenue Authority’s administration, more Liberians have had their goods and materials forfeited at the Freeport of Monrovia than in any time in the country’s history.

And the strange part is, the monies collected from these high tariffs go into the personal accounts of a select few individuals imposed on the country by President Sirleaf through high salaries, exorbitant travel expenses, and other immunities.

For example, citizens from Ghana, Kenya, Nigeria, Guinea and other African nations living abroad in Canada, the United States, Europe, Asia and Australia are shipping building materials and other goods back home for development purposes. I have friends from Ghana living in Canada who work, buy building materials and ship them home. I can’t do that because if I did, I will comparatively pay more in tariffs than the value I bought them for. As a result, I either forfeit them at the port of entry or may just decide against shipping anything home.

This kind of situation harms the country’s development and prosperity. It also makes it harder for Liberians overseas to consider doing anything back home. 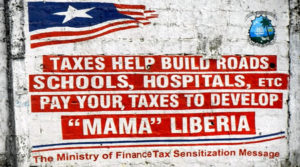 Moreover, Ms. Elfreda Stewart-Tamba allegedly earns a monthly salary of about $10,000 United States dollars per month for going to work very late and sitting in a luxury office located at the DuPort Road Junction. She is not a medical doctor or engineer. $10,000 United States dollars just for sitting behind a cushion chair and being served by an array of servants just to make frivolous decision arrogantly? Is this a qualification for being considered an expert at the international level? No wonder President Trump thinks the UN needs overall.  Furthermore, here is an individual who does not obey the law; she has repeatedly under-rated decisions of the Liberian judiciary and flatly invading justice and summons.  How can she tell people to obey tax laws when she has no respects for judicial system in her own country?

Is this the qualification that UN Secretary-General António Guterres considered for the UN Panel of Experts’ appointment?

The failed impact of Ms. Stewart-Tamba’s work in Liberia affects not only Liberians ––both individuals and small businesses–– they also affect Non-Governmental Organizations, especially local nonprofit groups. So, what we see is that taxes are high in the country but Liberians aren’t getting their lives’ needs met.

In more organized societies, taxes are paid to achieve public good. For example, many schools are funded by property taxes, which are taxes on the value of people’s homes. While Liberians pay property and other taxes, our schools have no libraries, playgrounds, or enrichment classes. That means the government has not met national and international standards.

Taxes are also paid to train people, create jobs and put people to work. Today, there are more Liberians out of work than in any time in the country ‘s history. And our officials in government travel abroad more than officials in any other country, with our president taking the lead in the number of travels per year, on tax dollars.

Our president is also a Harvard trained “economist.” But some of us that only completed grade school find it harder to understand her administration’s economic model, if there is any. In an evidence–based truth, we all know that an unnecessary increase in taxation reduces the returns to investment (in both physical and human capital) and Research and Development (R&D).
According to some of the acclaimed economists around the world, we learned that lower returns mean less accumulation and innovation, and hence, a lower rate of growth. This is the negative aspect of taxation that the Liberian administration has failed to grasp.

Taxation also has a positive aspect. Some public expenditure can enhance productivity, such as the provision of infrastructure, public education, and health care. Taxation provides the means to finance these expenditures and indirectly can contribute to an increase in the growth rate. On the contrary, we see less of these things in the last 12 years.

Imagine a revered elderly Catholic priest, Monsignor Reverend Father Dr. Robert Tikpoh, visited the United States and Canada to lobby for books so that he would build free public Library for Liberian students from all walks of life. Guess what?

Those books were kept at the Freeport of Monrovia just because the Liberia Revenue Authority led by Elfreda Tamba urged the priest to pay thousands of dollars for used donated books. Father Tikpoh, a friend of the president and a well-respected clergyman known by almost all Liberians, had to take his case to the local media before actions were taken, though lately. Imagine how many poor and powerless Liberians who do not have the status of Father Tikpoh that have fallen prey and vulnerable to this evil system.

So, again, Mr. United Nations Secretary General. What does Ms. Stewart-Tamba bring to the table when her handling of the Liberian revenue system kills jobs and ruins the lives of Liberian small business owners?

Blama G. Konuwah resides in Vancouver, Canada. He is a public issues analyst and senior contributor to Globe Afrique.

The life and legacy of boxing titan Muhammad Ali