Despite protests and cautions from businesses, U.S. allies, politicians, and his own political party, on Thursday, March 8, 2018, President Donald J. Trump signed orders imposing excessive tariffs on aluminum and steel imported into the United States. President Trump is imposing a 25% tariff on steel imports and 10% tariff on aluminum imports.

Should President Weah’s administration be concerned? Well, for now, the answer is yes and no. First, let’s put it all in context, then we can expand on why President Weah shouldn’t be too concerned.

What is a tariff? A tariff is a tax or duty that must be paid on a class of imports or exports. In this case, there’s a 25% tax on steel and a 10% tax on aluminum coming into the United States. The idea behind these taxes is to raise money for the government or to protect a particular industry from unfair foreign competition; in this case, President Trump is making good on a campaign promise to penalize China for perceived unfair trade practices.

Imposing taxes in this manner will affect, not just Liberia because of its iron ore exports, but the global economy because it creates a sense of uncertainty. On the other hand, Liberia shouldn’t be too concerned over these new 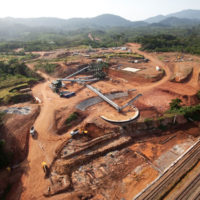 Similarly, China, Liberia’s second export destination of iron ore, and the world’s largest steel exporter’s top three markets include South Korea, Vietnam, and the Philippines – not the United States. On the other hand, many byproducts of steel manufactured in China are exported to the U.S., and they will be affected. In fact, China is the U.S. top trading partner.

For now, Liberia’s top export destinations of iron ore are not selling their key byproduct (steel) in the United States. Hence, President Weah’s administration should not be too concerned.